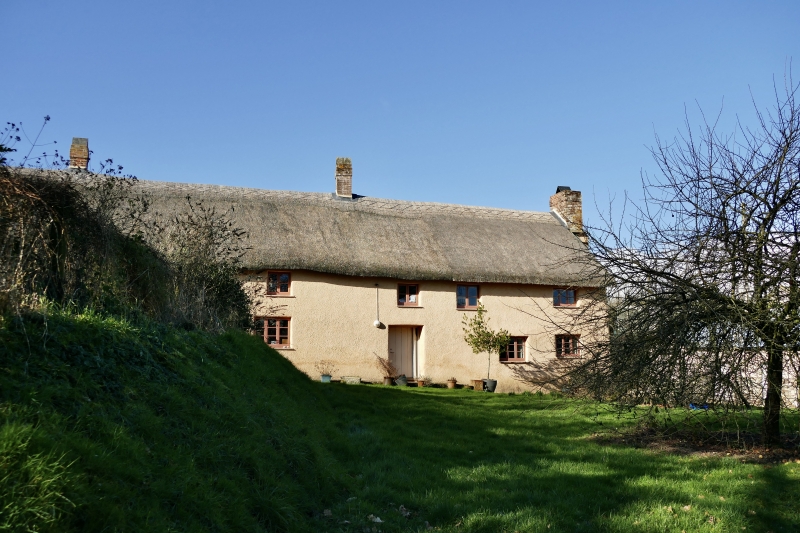 Farmhouse, once 3 cottages but originally a single farmhouse. C16 and C17.
Plastered cob on stone rubble footings; stone rubble and cob stacks topped with C19
brick; thatch roof.
Plan and development: 4-room-and-through-passage plan house facing east and built
down a gentle slope. There are 2 inner rooms uphill at the left (south) end. The
end one appears to be a secondary enlargement of a stair turret. The original inner
room has an axial (former gable-end) stack backing onto that extension. The hall
has an axial stack backing onto the passage. The service end room has a projecting
gable-end cob stack with a winder stair rising alongside to rear. Probably in the
C19 the 3 main room units were subdivided into separate cottages. The refurbishment
associated with this is hiding much of the evidence for the early development of the
house. Nevertheless it is clear that the original house was some form of open hall
house. The service end room is also a complete mid C17 rebuild as a kitchen. House
is now 2 storeys throughout.
Exterior: irregular 5-window front of C19 and C20 casements. The oldest, the first
floor window over the passage doorway, contains rectangular panes of leaded glass.
Most of the rest have glazing bars but the latest do not. There are 3 front
doorways from when it was 3 cottages. That to left is an insertion into the inner
room but that right of centre (with a side light) is the passage front doorway.
Both these contain C20 doors, the former behind a C20 porch. The right doorway
inserted into the service end room has a solid frame containing a C19 plank door.
Roof is hipped to left and gable-ended to right.
Interior is largely the result of the C19 superficial modernisation. Both hall and
inner room fireplaces are blocked and their ceiling beams boxed in. The walls are
plastered and the joinery detail c19. In this section the only feature exposed
earlier than the C19 is the lower section of the C16 hall roof truss, a side-pegged
jointed cruck. The roofspace is inaccessible and therefore it is not known whether
it is smoke-blackened from an open hearth fire. The service end kitchen however has
exposed mid C17 features. The crossbeam is soffit-chamfered with scroll stops, the
same finish given to the oak lintel of the rubble fireplace. The fireplace contains
a C19 cloam oven. The date 1809 inscribed on the lintel may date the subdivision
of the farmhouse to cottages. Roof here carried on an A-frame truss with pegged
lap-jointed collar with dovetail halvings.
This is an interesting and attractive multi-phase Devon farmhouse in which most of
its C16 and C17 features are hidden under C19 plaster.