A Grade I Listed Building in Milton Abbot, Devon 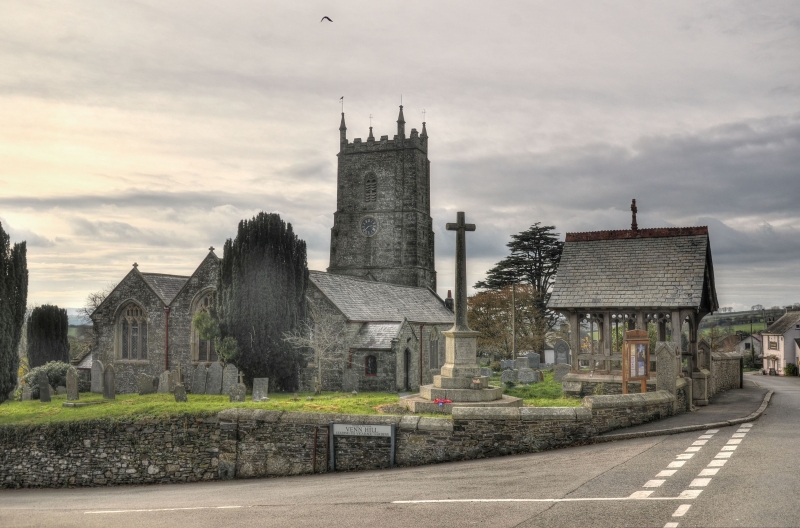 Parish church. Some evidence of C14 work, mostly C15, substantially restored in the
late C19. Dressed Hurdwick stone brought to course with granite dressings and slate
roof. West tower, nave, chancel, 4-bay north and south aisles each with 1 bay to the
chancel, south west porch, probably early C19 south east and north east porches.
Perpendicular style. The east walls of the north and south aisles are flush with the
east wall of the chancel: all have coped granite gables with kneelers and may have
been rebuilt. Three 3-light granite Perpendicular east windows with hoodmoulds, the
tracery is probably C15 but the mullions appear to have been replaced. The south
side has a south west porch and a small south east porch into the Bedford family pew.
Changes to the plinth and straight joints indicate rebuilding at the west and east
ends. Three 3-light C19 granite Perpendicular windows on the south side and one at
the west end of the south have hoodmoulds. The masonry of the south east porch is
not tied into the aisle, the porch has a coped gabled parapet with kneelers, a
chamfered arched doorway below a blocked window and 2 chamfered slightly pointed
lancets to the returns. On the north side the north east porch is similar, but
slightly larger. In the westernmost bay of the aisle there is a C15 shallow-moulded
arched priest's doorway with pyramid stops and a hoodmould. A projecting 5-sided
stair turret to the former rood screen is in the bay next to the north east porch.
The north aisle has 3-light granite Perpendicular windows with hoodmoulds, mullions
and jambs replaced. The 3-stage battlemented west tower has diagonal buttresses with
set-offs to the south west and north west corners, terminating in corner pinnacles
with castellated cornices below obelisk finials. The south east buttress is set-back
to the bottom stage and diagonal above. A projecting north east stair turret with
set-offs and slit windows is battlemented and the north east tower buttress is set-
back. The tower has a plinth and chamfered string courses. The west face of the
tower has a deeply-moulded arched west doorway under a hoodmould with a stone
relieving arch above, and a 3-light C19 or C20 Perpendicular granite west window. A
rectangular glazed opening at bellringers' stage has a cinquefoil-headed light and
carved spandrels. The clock on the east face has a moulded granite frame. Belfry
openings on all faces of the tower consist of 2 cinquefoil-headed lights below a
cusped roundel. The south west porch has a coped granite gable with an C18 sundial
and a shallow-moulded almost round-headed doorway. The porch has a C19 ceiled waggon
roof with moulded ribs and carved wall plate and bosses, slate benches. The steeply-
pointed narrow inner doorway with deep moulding and a hoodmould may be C14.
Interior There is evidence of considerable re-arrangement to both the north and
south arcades, probably reflecting a C15 rebuilding of C14 aisles. The west respond
of the north aisle may be C14 - it has a different moulding and a taller capital and
shorter pier than the rest of the arcade. The westernmost pier also has a taller
capital and is shorter than the other arcade piers but has the same 4 hollow and 4
shaft moulding and carries the same double hollow-chamfered arch. There are also
variations in the height of the piers and capitals of the south arcade. Moulded
granite corbels which formerly supported the arches into the chancel chapels suggest
that the east end of the church may have been wholly rebuilt, one similar granite
corbel on the south side originally supported the chancel arch. The present chancel
arch is a pair of C19 moulded timber arches supported on paired brackets. Tall
chamfered tower arch. Roofs throughout are ceiled wagons with moulded ribs and
carved bosses. The nave roof has a carved wall plate and the bosses appear to be
original. The aisle roofs have moulded wall plates and C19 bosses, the chancel roof
appears to be wholly C19. The chancel has C19 tiling and a circa 1930s reredos with
a carving of the last supper recessed behind panels with traceried canopies. The
font is probably C19 with an octagonal bowl carved with blind quatrefoils alternating
with other motifs on an octagonal stem with blind traceried panels. The Bedford
family pew has Gothic late C19 panelling above a dado and contemporary benches with
blind traceried panels and coats of arms. The Bedford servants' benches have various
designs of traceried panels and the vicar's seat is set in the Bedford servants'
block of benches. The late C19 timber pulpit is octagonal on a tall stem with
moulded ribs and has deeply-cut blind traceried panels. The nave seating is also
late C19 with plain recessed panels. A painted Royal Arms of William IV hangs in the
tower. The rood loft stair is intact with chamfered 4-centred arches to the
doorways. A wall monument to William Salmon, died 1750 has Corinthian columns
flanking the inscription panel with a broken pediment above containing armorial
bearings. Several C19 windows including a Hardman window in the easternmost bay of
the north aisle commemorating Robert Stephens Jago, died 1866.
Devon Nineteenth Century Churches Project.