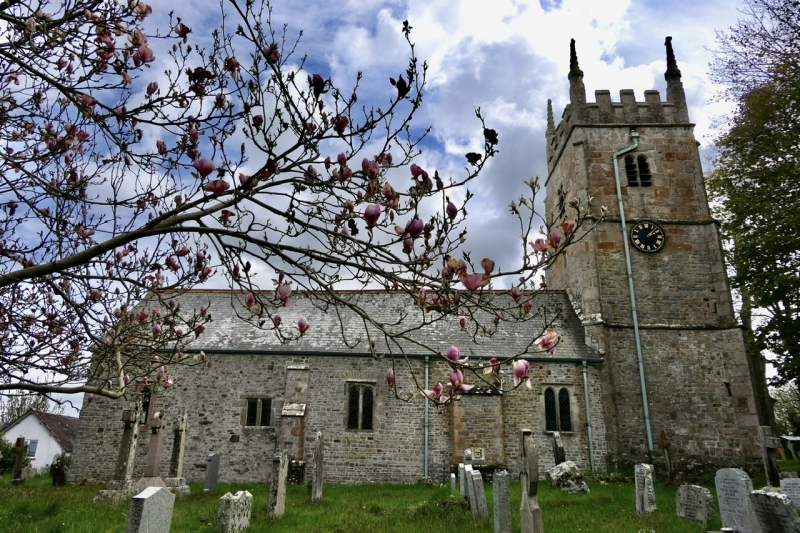 JACOBSTOWE JACOBSTOWE
SS 50 SE
7/163 Church of St James
-
22.2.67
GV II*
Parish church. C12 origins but main fabric dates to C15, restored and extended in
1902 - 3. Stone rubble walls with granite ashlar to buttresses and upper stage of
tower. Gable ended slate roof.
Plan: Nave, chancel, west tower and south porch, vestry on south side of chancel.
The church dates back to the C12 from which the south doorway and the font are the
only recognisable feature although some of the fabric of the nave may also be
similarly early. There was evidently a major remodelling in the C15 when the tower
was added. In 1902-3 the church was restored, the chancel lengthened by 5 feet and
the vestry probably added on its south side.
Exterior: 3 stage battlemented west tower with crocketted pinnacles and diagonal
buttresses. Granite 4-centred west doorway, hollow and roll moulded with incised
scroll stops. Its hoodmould has armorial shields in its labels. C17 or earlier
studded plank door with moulded cover strips and foliage carving in its head. 3-
light granite Perpendicular west window. North side of nave has C15 2-light mullion
window with 2-centred heads restored 1 and 2-light window of similar style to either
side. C17 2-light mullion window between them. 3-light Perpendicular east window,
above which - set into the wall - is a carved stone seated figure which may be
Norman. Vestry projects in small wing from south side of chancel. On south side of
nave is another 2-light C17 mullion window and a 3-light cinquefoil-headed restored
window to the west of it. Restored C15 2-light cinquefoiled window to west of
porch. Small single storey south porch has crudely chamfered round arcned doorway.
Interior: walls have C20 plaster. Plain C12 south doorway with round head and
aood:aouid above. C16 or C17 studded plank door with chamfered cover strips. Porch
roof is plastered. Double chamfered roundheaded tower arch. Simple wagon roof
whose ribs nave been renewed and a decorative wooden arch inserted over the junction
between nave and chancel. The pulpit incorporates pieces of carved wood believed to
come from the medieval rood screen. Simple square probably C12 tub font on central
shaft set in square base.
Sources: Beatrix Cresswell -
Notes on Devon Churches : Deanery of Okehampton : Kelly's Directory 1906.