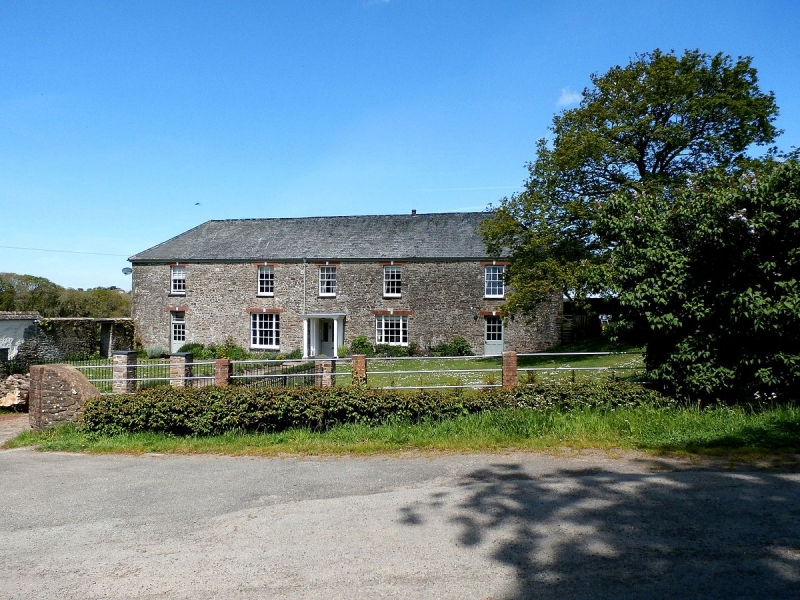 Farmhouse. Circa early C17, almost certainly a remodelling of an earlier house; C18,
C19 and C20 alterations. Stone rubble; slate roof (hipped at ends); 3 rear lateral
stacks enclosed by later outshuts, end stack to north-east wing (shaft truncated),
lateral stack on inner (west) return of wing.
Plan: Approximate L plan: a south facing main range, 4 rooms wide, the 3 left hand
rooms heated from rear lateral stacks; approximately central entrance into a narrow
cross passage. A rear right (north-east) wing and a second wing adjoining it on the
west form the overall L plan with a series of outshuts and additions to the main
range. A C17 stair rises between the north-east wing and the main range, a late
C19/early C20 stair rises in one of the rear projections. Although the main range
appears to be early C19 from the exterior it is at least early C17 in origin. A
concealed date of 1624 survives on the fireplace of the 3rd room front the left
(west) and this room may have been the early C17 hall, the present entrance
corresponding to a C17 cross passage entrance. The north-east wing was no doubt a
parlour wing with a first floor chamber (wagon roof). However, extensive rebuilding
has clearly taken place. A C17 fireplace in situ in a garden wall about 1½ metres
from the east end of the main range indicates that the house has been truncated and
the quoins at this end incorporate re-used moulded stones and much of the internal
carpentry of the main range is also re-used timber (information from the owner). It
seems likely that the east end of the house is the early C17 higher end with a hall
and (now truncated) inner room parlour with a parlour wing at right angles. Of the 2
putative lower end rooms to the left (west) of the entrance, one retains a fireplace
with slates set on edge and is unlikely to have functioned as a kitchen. The inner
north-east wing, now the farm office, was used as a kitchen in the early part of the
C20. The existing kitchen is the right hand room of the main range, the parlour wing
has been re-partitioned as a service wing on the ground floor with bedrooms above.
The remains of a service courtyard survives to the north. The circa early C19 re-
fronting of the main range has provided an approximately symmetrical south elevation.
Exterior: 2 storeys. Almost symmetrical 5-bay south front with a circa early C19
porch with timber columns and a C19 half-glazed front door. Arms of the Pollard
family above the front door. C19 doors to the extreme left and right, the left hand
door with a glazed overlight, the right hand door half-glazed. Flanking the central
front door, 2 tripartite C19 sashes, 12-pane in the centre, 4-pane in the outer
lights; 5 first floor 12-pane sashes: all the windows have painted flat brick arches
with keyblocks. The north east wing has laced masonry courses on the east side.
About 1½ metres east of the east wall of the house a retaining garden wall
incorporates a fireplace with ovolo-moulded stone jambs and a fireback of slates laid
on edge.
Interior: The main range rooms have high ceilings and no evidence of early exposed
carpentry. The chimney-pieces to the lateral stacks have all been partially or
completely rebuilt with replaced lintels. In the third room from the left the
original ovolo-moulded jambs survive in situ (matching the jambs of the fireplace in
the garden wall). A relieving arch has been dismantled and rebuilt inside the
existing fireplace. C17 carpentry includes a staircase with a moulded handrail and a
mixture of bobbin turned and turned balusters. A C17 panelled door on the first
floor retains cockshead hinges: other first floor doors include C18 2-panel doors,
some with original hinges, 2 with C17 doorframes.
Roof: Not seen in detail at time of survey (1988) but the main range appears to be
pegged 'A' frames with halved collars and evidence of re-used timbers. The wagon
roof over the north-east wing has a modern ceiling below it and is said to retain
some fragments of old plaster.
The Pollard family is said to have lived at Langley from 1303-1732 (Church Guide).