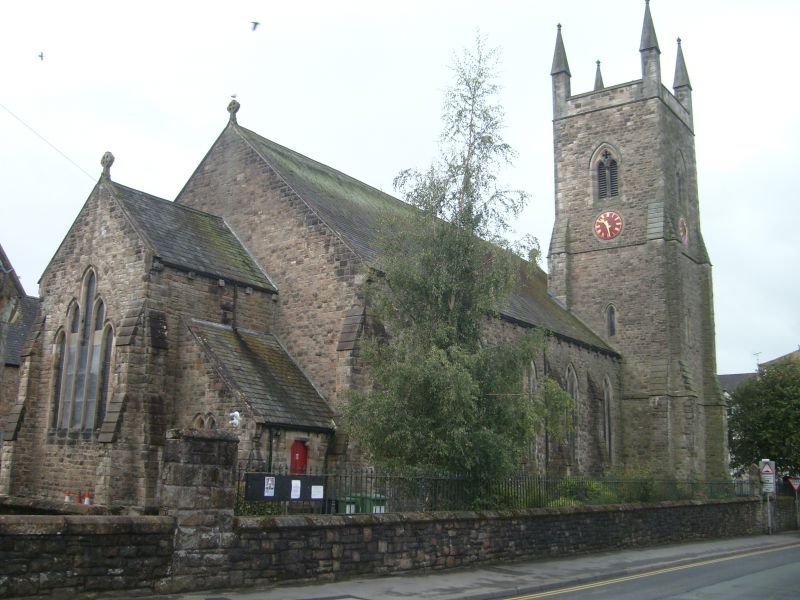 EXTERIOR: The church is built in the simple Gothic style and proportions that were favoured in the early C19. The nave has buttresses and corbel table, and 5 tall transomed 2-light plate-tracery windows with stepped 5-light west window that lights the gallery. Below it is a west doorway with cusped arch, flanked by lancet windows. The lean-to south porch has segmental-headed south doorway and trefoil stair windows. The 3-stage tower has angle buttresses, plain parapet and plain pyramidal pinnacles. Its north doorway is similar to the porch entrance. It has lancet windows in the lower stages and small 2-light belfry openings. The chancel has angle buttresses, stepped 5-light east window and 2-light plate-tracery south window. The lean-to vestry is an integral part of the design, with paired lancets to the east window and shoulder-headed north doorway.

INTERIOR: Two tiers of superimposed cast-iron posts support the nave gallery and the 4-way arched braces in the roof. The 5-bay roof is plastered behind common rafters and above collar beams. The chancel arch is double-chamfered and the chancel has a richer polygonal roof with moulded and painted cornice and ribs. Walls are plastered. There are raised floorboards in the nave and decorative tiles in the sanctuary. The vestibule incorporates gallery stairs with cast-iron balusters, and has a floor of diaperwork red and yellow tiles. Half-glazed doors, under overlights with intersecting glazing bars, lead from vestibule to nave.

PRINCIPAL FIXTURES: The gallery frontal is decorated with shoulder-headed panels. The font has a small octagonal stone bowl with carved decoration including Evangelist symbols, and font cover with figure of Simeon (added in 1935). Behind the font are metal plaques with texts, presumably moved from their original position in the chancel. These belong with the 1865 building. Other fixtures are later, including the wooden polygonal Gothic pulpit. The panelled chancel dado, incorporating a canopied timber reredos, is c1900, and the chancel retains its encaustic tiles. There are stained glass windows of the late C19-early C20, including one signed by Heaton, Butler & Bayne, depicting Christ casting out spirits in the east window. The pews have been removed in the early C21.

HISTORY: Parish church of 1865 by William Bruce (fl. 1862-66), architect of Whitehaven; he also designed St Margaret's church at Wythop nearby (1865-66. Pevsner describes the church as 'an extraordinarily reactionary design', but its very conservatism is actually a ground of special interest.

REASONS FOR DESIGNATION: Christchurch, Sullart Street, is designated at Grade II for the following principal reasons:
* The church is of special historical interest because it retains the style and plan of early C19 Gothic churches, including a gallery and short chancel, which had long been unfashionable by the 1860s.
* The church has retained its original external character, retains some original fittings, and is one of a minority of C19 churches that has retained its original nave galleries.
* The case window is of high quality.