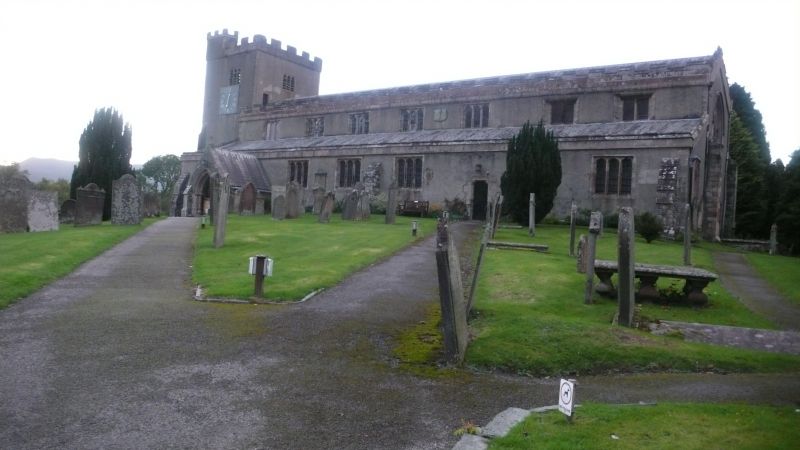 EXTERIOR: Mainly in Tudor-Gothic style. The 3-stage west tower has diagonal buttresses and an embattled parapet incorporating a higher south-west turret. The west doorway is under a C19 shouldered lintel and above it the 4-light window has C19 Perpendicular tracery in a C16 opening. Square-headed belfry openings have triple round-headed lights with sunk spandrels (replaced in wood to the west face), and a big south clock face is on a slate panel. The 7-bay nave and chancel have an embattled red-sandstone parapet (dated 1812) and gable. Clerestorey 3-light windows are square-headed, with round-headed lights and sunk spandrels, except the two 2-light south chancel windows which have plain mullions. In the south wall is a slate sundial with gnomon. The chancel has freestone angle buttresses and C19 5-light Perpendicular east window. The south aisle has a C19 parapet and 3 buttresses. Six 3-light windows are similar to the clerestorey windows, and a doorway under a shouldered lintel was the entrance to a chapel at the east end of the south aisle. The east window is also 3-light, the west window 2-light with ogee-headed lights. The porch is typical Scott, in Early-English style with buttresses, steep roof, and entrance with filleted shafts. Inside, the south-aisle doorway under a segmental head is a C19 renewal of an earlier doorway. The north aisle incorporates a vestry that embraces the west tower. The vestry has 4-light square-headed north and west windows. Windows in the aisle proper are also square-headed, of at least 2 phases in the C15 and C16, either with ogee-headed, cusped, or round-headed lights with sunk spandrels. There are six 2-light windows, in the first bay with wooden mullions, and two C16 3-light windows at the east end, and 2-light east window. A north doorway, corresponding with the south doorway, is round-headed with continuous moulding, of late C16 or C17 character but a C19 rebuild. There are several slate grave slabs attached to the outer walls, including 2 of the early C19 attributed to William Bromley, mason of Keswick.

INTERIOR: The interior is wide and spacious. The double-chamfered tower arch dies into the imposts, indicating that there was a tower here before the C16. The 7-bay arcades have octagonal piers and double-chamfer arches, a dated form if they are as late as the C16. They look to be a century earlier at the latest. The eastern bay is wider. Roofs are C19. Nave and chancel have a 13-bay tie-beam roof. The truss at the junction of nave and chancel has corbelled brackets, and in the chancel the beams are castellated. Aisle lean-to roofs have moulded principals and purlins, and foliage bosses. At the east end of the north aisle are angels at the foot of the principals, indicating the former presence of a chapel. In the chancel is a re-set piscina under a Tudor head. There are 9 consecration crosses in the aisle window reveals, of 1523. Walls are plastered. Nave and aisles have stone floors except for a raised floor at the west end, and C20 polished stone floor to the baptistery in the south aisle. The chancel has a polished stone floor of 1972, the sanctuary a mosaic floor of 1889.

PRINCIPAL FIXTURES: The font was made c1395 in commemoration of Sir Thomas of Eskhead. It is octagonal, with worn relief foliage, and a representation of the Trinity, around the bowl, on a panelled stem. Benches, probably of 1844, have ends with arms rests. In the south aisle is the Gothic frontal of a family pew dated 1826, and a Gothic box pew labelled `J Jackson Armboth¿. The C19 pulpit on a C20 stone base is polygonal with linenfold panels. The open-arcaded lectern is earlier, possibly 1844. Choir stalls have ends with poppy heads and carving on arm rests, and arcaded frontal. The back tier has curved arm rests and a screen behind it on turned balusters. The communion rail has wrought-iron scrollwork. The Tudor-panelled reredos has a shallow canopy and 3 relief brass panels, signed JB. The earliest monuments are male and female effigies, said to be Thomas Radcliffe (d 1495) and his wife, now lying in the south aisle. Next to it is a large slate slab, set up on legs like a table tomb, but originally laid in the floor and with 2ft brass effigies to Sir John Ratcliff (d 1527) and his wife. He was the chief patron of the C16 enlargement of the church. In the south aisle is a recumbent white-marble figure by J. Louth (1846) on a Gothic chest, to the poet laureate Robert Southey (1774-1843), who is buried in the churchyard. There are several other C18 and C19 wall tablets, including 2 by Webster of Kendal, C18 brass plaques in the chancel and 1914-18 war-memorial plaque by E. Harrison of Keswick. There are fragments of medieval stained glass in 2 aisle windows. The crucifixion east window is by Kempe (1897), and other windows are attributed to Wailes.

HISTORY: The earliest features of the church are the C14 tower arch and the late C14 font. The north aisle includes some C15 windows, but the church was substantially rebuilt in the early C16 and consecrated in 1523. The tower is said to be slightly later, of c1530-35. The patron was Sir John Ratcliff, whose brass effigy is in the church. The church was extensively restored in 1844 by George Gilbert Scott (1811-78), architect of London and the most prolific restorer of churches in the C19. Restoration was undertaken mainly at the expense of James Stanger of Lairthwaite, and was prompted by a campaign raising funds for a monument in the church to Robert Southey. Scott rebuilt the roofs and added the south porch. Some furnishings also date from Scott's restoration.

REASONS FOR DESIGNATION: The church of St Kentigern, Crosthwaite, is designated at Grade II* for the following principal reasons:
* It is a substantial late-medieval parish church retaining significant original fabric and detail.
* It has fixtures of special interest, including a rich late C14 font, and good-quality C19 benches, lectern and chancel fittings.
* Its monuments are of special interest, including C15 effigies, C16 brass, and C19 effigy, by the noted sculptor, J. G. Lough. The latter commemorates the poet-laureate Robert Southey, who is buried in the churchyard.
* Its restoration was carried out with sensitivity by the great Gothic Revival architect, (Sir) George Gilbert Scott.