A Grade I Listed Building in Caldbeck, Cumbria 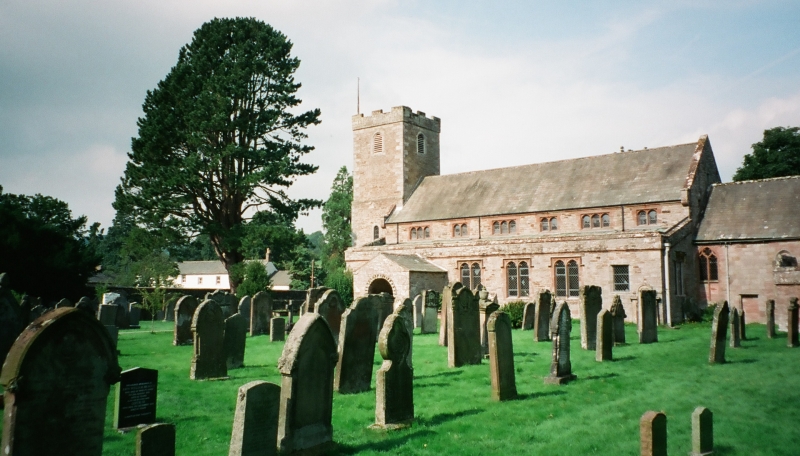 Parish church. C12 and C13 with alterations of 1512 and 1727, with 1880
restoration by C.J. Ferguson and 1932 restoration by J.F. Martindale. Large
blocks of mixed sandstone; tower of limestone with flush sandstone quoins.
Graduated greenslate roof with coped gables and cross finial. 3-storey square
west tower; 6-bay nave with north and south aisles and south porch; 2-bay
chancel with south vestry. Tower is medieval up to string course with small
round-arched window; upper storey is dated by internal inscription THIS STEEPLE
WAS BUILDED IN THE YEAR 1727, with louvred round-arched openings under
battlemented parapet. Aisles have 2-light 1932 windows with trefoil heads under
hoodmoulds based on one original in the east wall of south aisle. 2- and
3-light clerestory windows are also of 1932. Porch has reused Norman arch with
beakhead carving at front and zigzags behind. Chancel has 2 original lancet
windows and a lower squint. 5-light east window has weathered inscription to
John Whelpdale who rebuilt the chancel in 1512. South wall has 4-light window
over early C16 chantry chapel, now vestry. Interior of tower has broad newel
staircase. First floor opening into nave has Norman zigzag arch stones, moved
there in 1932. Porch has medieval graveslab attached to wall and holy-water
stoup recess. Nave has 6-bay arcades of round and hexagonal columns which do
not fit exactly the pointed arches. C14 hexagonal font in baptistry. C13
piscina in south wall of aisle. Royal Arms of George IV at west end and painted
wall text of 1731. Open timber ceiling of 1932. High openings in east wall of
nave are original. Chancel has timber roof of 1880. East window by Wailes
1867. c13 graveslab of Thomas de Bray. Blocked priest's door in south wall.
See Reverend F.B. Swift, A History of Caldbeck Church, 1980.