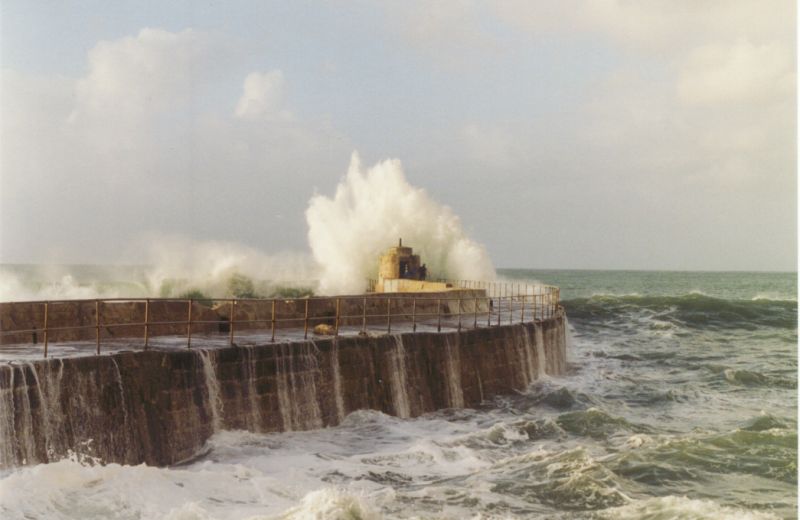 In the entry for

GV II
Harbour. 1760 to 1860's. Killas and slate rubble and dressed granite blocks.
Outer harbour and 2 basins in line, on north-west/south-east axis. The harbour,
begun in 1760 and improved in 1778-81 and 1824, has curved sides formed by
excavated natural rock with a short outer bullnose on the north side and a long
curved pier on the south; the bullnose, of granite blocks, has on its outer side a
flight of steps secured by iron staples; the pier is mostly of large dressed
granite blocks but patches of earlier vertically-set rubble masonry are visible at
a low level; a gated slipway at the south-west corner probably belongs to the
last phase of building in the 1860's. At the inner end a short passage with
slotted sides leads to the "new basin" begun in 1800 for the accommodation of
up to 25 vessels: this is rectangular, 280 feet long and 95 feet wide (approx.
80x30 metres), with side walls of large kIllas and slate rubble with some patches
of dressed granite blocks, and a recessed flight of steps at the north-west
corner. Another passage at the inner end opens into the "inner basin" of 1846,
200 feet long and 100 feet wide (approx. 60x30 metres), which has side walls of
large dressed granite blocks, a flight of steps at the north-west corner, and a
slipway in the centre of the inner end. History: developed on lease by the Basset
family, for the import of coal and export of copper and tin ores, and linked to
the inland mining areas by tramroad up the Portreath Incline (q.v.). Reference:
Michael Tangye Portreath (1968).