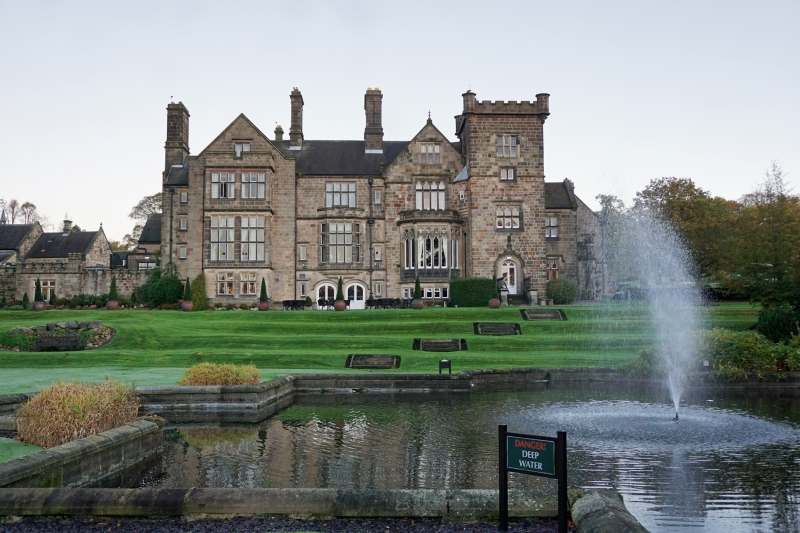 Country house, now hotel, golf and country club. Built on the
site of a C13 Augustinian priory of which a fragment survives.
Elizabethan E-plan house facing east, greatly enlarged and
remodelled c1861 by Robert Scrivener and with a west wing of
1906, both in Elizabethan style. Gritstone ashlar. Plain tile
roofs with stone coped gables with plain kneelers. Various
ashlar ridge and gable stacks. Two and three storeys. South
elevation of six irregular bays. From left to right: single
light recessed and chamfered mullion window to each floor.
Projecting gabled bay with a projecting full height square bay
window. This has two cross windows to the ground floor, a pair
of 3-light windows above with two transoms, and a pair of
3-light windows above again with a transom. Moulded
stringcourses. In the gable above, a 2-light window. To the
right is a two bay open arcade with segmental arches and within
are two round-arched windows with glazing bars. Canted oriel
above of 1-3-2 lights with two transoms. Plain parapet.
4-light mullioned and transomed window above again. Moulded
stringcourses. To the right a single light window to the first
and second floor. Here the 1899 wing joins the earlier house.
Gabled bay has a two-storey C19 canted bay with 2-4-2 light
mullioned windows, the upper ones trefoiled with quatrefoils
above. Castellated parapet. 4-light mullioned and transomed
window above with trefoiled lights. Corbelled-out stair turret
to right of this. C16 3-light mullioned and transomed window
above again. Projecting square tower to right has an ogee
doorway with crockets and fleurons, and colonnettes with
stiff-leaf capitals. 3-light mullioned and transomed window
above with trefoiled lights. Intermediate 2-light window above
and a 3-light, C16, mullioned and transomed window above again.
Castellated parapet andcorbelled out polygonal angle turrets.
East elevation of six irregular bays. The tower to the left has
three 3-light mullioned and transomed windows. The upper two are
C16. Then three gabled bays, the third cut by a projecting
wing. The fenestration is of c1861, consisting of 2, 3 and
4-light mullioned and transomed windows with hoodmoulds, and
some with trefoiled heads. Projecting C15 style porch with
polygonal angle turrets and parapet with lozenge frieze.
Projecting wing to right has a castellated canted bay window of
1-4-1 lights, two cross windows above, and a castellated parapet
with corbelled-out polygonal turrets. Irregular north elevation
has C16 3-light mullioned and transomed windows in the gables
and remains of several other C16 windows below, brocken into by
later windows. Castellated wall attached to south west, with
two gothic doorways, the latter flanked by re-set carved
pilasters. The interior has the remains of one C13 doorway with
roll moulding. The entrance hall is of c1861 with a two bay
Perp style arcade and two other similar archways. Staircase has
twisted balusters. The drawing room has a C19 gothic
chimneypiece and Adam style doorcases. The library and the
billiard room are of 1906 with lavish C17 style carved oak
woodwork and plaster ceiling. The billiard room has a fireplace
bay with a gallery above. Off the entrance hall a large gothic
door with elaborate wrought iron work, made by Mr Haslam for the
1851 exhibition. Dining room has Elizabeth style carving and
plaster work. History: the Augustinian priory was founded in
the C13 and suppressed in 1536. It was granted to Henry, Duke
of Suffolk, in 1552 and sold in the same year to Thomas
Babington. In 1799 it became the property of Erasmus Darwin who
died here in 1802.