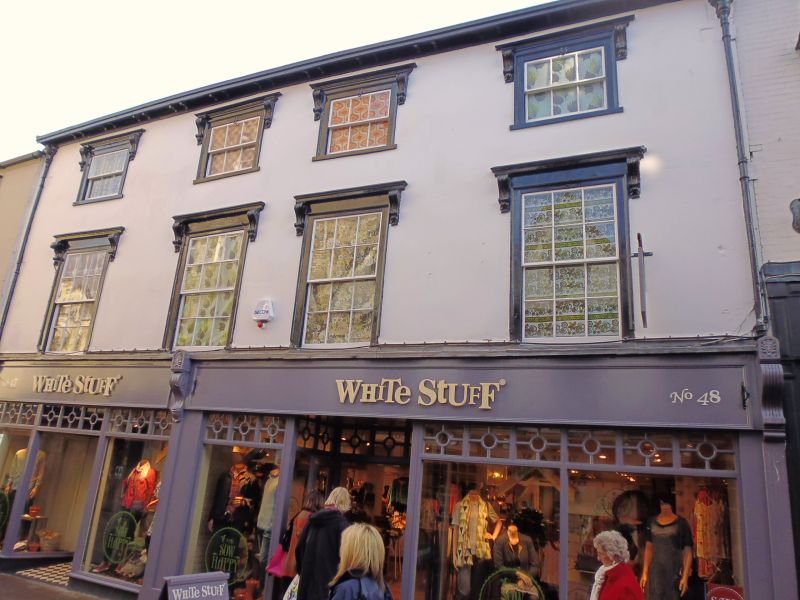 Shop, formerly 2 shops and houses. Early C19 front with a
vestigial core of c1300; each half of the property has a long
timber-framed rear range. Timber-framed and rendered; slate
roof to front range, C20 tiles to rear.
EXTERIOR: 3 storeys and cellar to front range, 2 storeys and
part attics to rear. A paired bracketed eaves cornice to the
front. 4 window range: small-paned sashes with wooden
architraves and cornices on enriched console brackets. Late
C20 shop fronts.
INTERIOR: very fragmentary, with late C13/early C14 features,
exposed during restoration in 1988, now removed or concealed
again. The timber-framed east boundary wall with No.46 (qv),
although hidden, is still substantially complete, with passing
braces and scissor braces, and the associated structure of
No.47 was initially jettied along the street frontage and
contained a shop and a wide passage leading to a hall at the
rear. The jetty structure and the bressumer survive.
The rear range, difficult to analyze in its present form, has
a C15 core and retains a coupled rafter roof (information from
P Aitkens). The front was raised in the early C19 and the
remodelled 1st storey room has a small ornate plaster cornice
with bead and reel decoration.
The west party wall to the front range of No.48, now also
concealed, is of medieval flint rubble, and the long rear
range is in several sections, part C16, part C17, the most
northerly with the remains of a plain crown-post roof and the
upper framing of an end wall surviving; to the south of this
wall, an early C17 range with its upper west wall covered in
square Jacobean panelling, including several re-set panels
with guilloche or lozenge designs.
In the ground storey rear, facing onto the former garden, a
wide early C19 bow window has 3 small-paned sashes divided by
reeded pilasters above a panelled dado. At the rear, a C16
timber-framed outbuilding, formerly detached, but now linked
by a C20 extension to No.47, is in 2 bays with a chimney-stack
at the south side. Heavy plain flat joists to the ground
storey ceiling; timber lintel to fireplace; roof apparently
C18 renewed. This seems to have been used as a kitchen or
brewhouse.
Thought to have been the capital messuage of John of