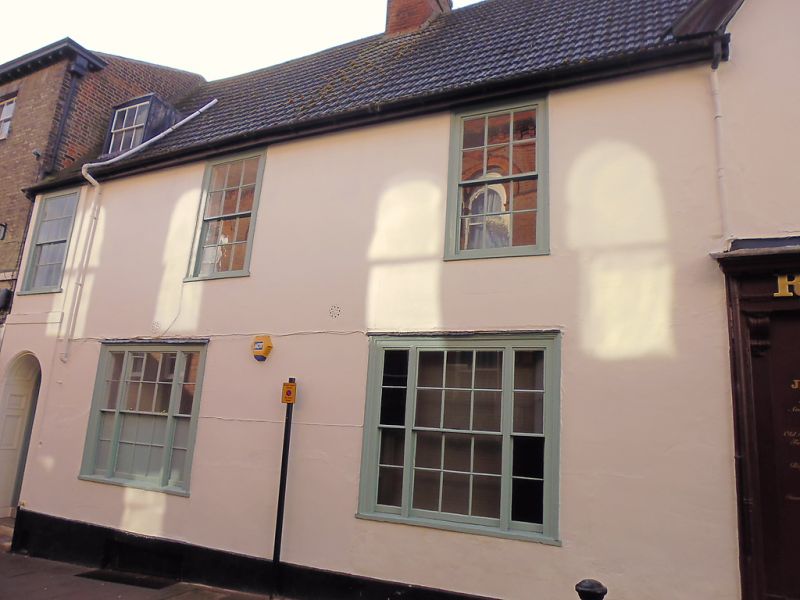 Includes: No.28 HATTER STREET.
2 shops, one on the ground storey, the other on the first
storey approached from No.28 Hatter Street. Late C16/early C17
core, refronted in the C18.
EXTERIOR: 2 storeys and cellar to the one-bay Abbeygate Street
frontage, In 2 separate ranges, both timber-framed and
rendered with C20 double Roman tiled roof. 2 storeys and attic
to the 3-bay Hatter Street front. A single 12-pane sash window
in a flush cased frame to the front and another to the gable
end of the Abbeygate Street range. The shop front overlaps
partly with the ground storey of No.46 and extends round a
quadrant corner into Hatter Street, formerly with a corner
entrance, now blocked. It has a moulded fascia supported by
console brackets, windows divided by plain vertical bars, and
panelled stall-boards. A recessed entrance door to Abbeygate
Street. The Hatter Street range has two 12-pane sash windows
in flush cased frames to the upper storey and 2 small-paned
tripartite sashes with diminished side-lights to the ground
storey. A single flat-headed lead-covered dormer with a 6-pane
sash window. The recessed entrance door at the south-end is
approached up 3 stone steps: semicircular-arched doorway with
panelled reveals, Edwardian 4-panelled door, unusual star form
to the radiating glazing-bars of the fanlight.
INTERIOR: the cellar wall along the Abbeygate Street frontage
has a base of stone blocks with some coursed flint above, old
render, and renewed ceiling beams. No other original features
are exposed.