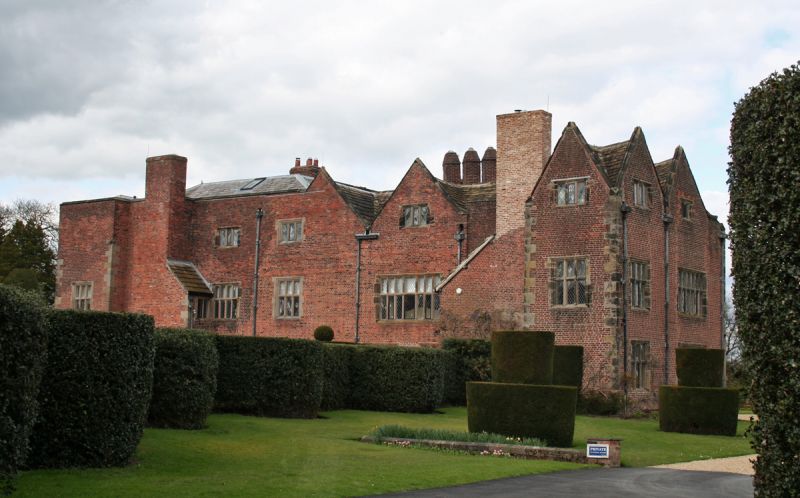 Country house. Dated 1585 on heraldic datestone with additions and
alterations of c.1653-6, c.1764, c.1944 and 1966. Intended to be the
first phase in the building of a much larger E or H-shaped house on
which work was begun c.1585 and halted c.1590 and never again
continued to the original plan. Built for Sir Randle Mainwaring and
successors, the architect for the restoration and alterations of 1966
being R B Wood-Jones. Red English bond and English garden wall bond
brickwork with stone dressings and stone slate roof. Three storeys
with basements. South-west front: Originally symmetrical, or nearly
so, in its massing, though not in its fenestration, the attics to the
left were raised c.1653-6 and the gables at that side were replaced by
a level parapet. Recessed central portion has basement area to right
of centre with cambered headed stone surround to doorway (now blocked)
and 3-light mullioned window. C20 imposed stone doorway at ground
floor level slightly to left of centre. Two 4-light casement windows
to right with mullions and transom. One 4-light and one 2-light
similar windows to left. First floor: 7-light window to right of
centre with mullions and transom and wider central light. Three-light
similar window to left of centre and 4-light similar window to left
again. Second floor: Three 3-light mullioned windows that to left
set in gable. That slightly to left of centre marks the junction of
the raising of the roofline and has, in consequence, one sloping gable
shouldered to right which dies shortly after its summit into the
parapeted wall in which the left hand window is set. This newer
walling here, and elsewhere on the house, is of English garden wall
bond as opposed to the original English bond. To either side of this
central portion are massive projecting chimney breasts with deep
off-sets sloping towards the centre, also part of the rebuilding of
1653-6, that to the right having a 3-light mullioned window with
transom, that to the left a 2-light mullioned window to its inner face
at first floor level. Beyond these are projecting wings with stone
quoins to their angles, originally both gabled; the left hand one was
raised as part of the alterations of 1653-6 and has a flat parapet.
Three-light windows to first and second floors, right and left. The
windows on this front as elsewhere all have stone surrounds and
mullions and transoms (where present) with early examples of ovolo
mouldings. Right hand return: 3 and 6-light ground floor mullioned
windows each with transom. Similar arrangement to first floor and
three and 2-light mullioned windows to second floor attic gables. To
right of this is a projecting wing which was cut short at its right
hand end when building ceased c.1590. The upper two storeys of this
were rebuilt in the alterations of 1653-6. Basement window of 6
mullioned lights with wide central mullion in an area. Six-light
window to ground floor, five lights to first floor and 4 lights to
second floor, all mullioned with parapet above and stone coping. Left
hand return: Six and 3-light ground floor mullioned windows. Four
and 3-light ground floor mullioned windows as below and 3 mullioned
windows each of 3 lights to second floor. To the left of this is the
uncompleted wing as on the right hand side with a 6-light basement
window in an area with wide central mullion and 5, 4 and 3-light
mullioned windows to the.ground, first and second floors respectively.
Entrance front: 6 bays. Projecting wing to right of centre. In 1966
a large continuation to this wing (of c.1764) was demolished and the
present 3-bay facade built. To the left of this projecting wing are
two bays with 6-light mullioned window to left and 3-light similar
window at right with doorway to right again having an heraldic stone
panel above with central armigerous shield surrounded by strapwork and
masks and flanked by male and female terms to left and right
respectively. Lintel above frieze with date 1585 in relief to centre.
Two 6-light mullioned windows to first floor, and two 3-light
mullioned windows to second floor with gables over. To right of the
projecting wing area 6-light ground floor mullioned window, similar
window to first floor with 3-light mullioned window to second floor
with parapet above.
Interior: Cross passage with staircase to north-east wall of four
flights, two of them original and two more added c.1966. Richly
moulded newels with extended finials and balusters with deep, heavily
moulded banister rail. Contemporary wall panelling with frieze above
showing deer in a grove of fruit-bearing trees. Kitchen: Open timber
ceiling of heavy beams arranged as coffers infilled with short,
chamfered beams running in chequered alternation or containing quarter
circles. Hall: Panelling brought from Horsley, near Chester, this
century. Morning Room: Panelling brought from Otley Park, Shropshire
and Ellesmere, Shropshire, this century. First floor: Oak room:
Moulded truss of c.1585 with panelling of c.1650 and contemporary
fireplace with Ionic pilasters. Long gallery: the floor was lowered
c.1764 at which time the bolection moulded panelling was installed
with a plaster frieze above. Second floor: Garret roof of exposed
common rafters with braces of scissor-truss type.
[Sources:]
R B Wood-Jones "The Architectural History of Peover Hall,
[ Cheshire",Transactions of the Lancashire and]
Cheshire Antiquarian Society - Vol.72, 1962.
Nikolaus Pevsner & The Buildings of England: Cheshire, 1971.
Edward Hubbard