A Grade I Listed Building in Peover Superior, Cheshire East 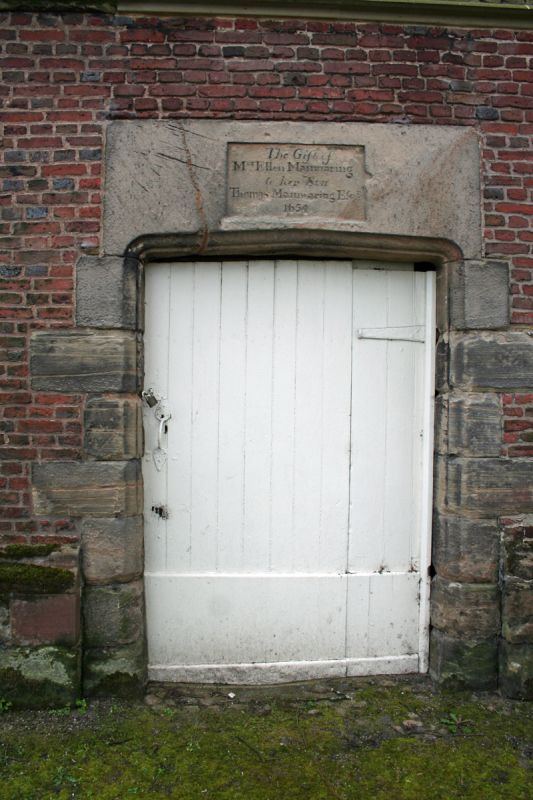 Stable block. Dated on inscribed panel to door lintel; "The Gift of
Mrs Ellen Mainwaring/to her son/Thomas Mainwaring Esq/1654" with
early/mid C18 first floor. Plum and red English bond brick with stone
dressings and slate roof. Two storeys. Entrance front: moulded
stone plinth and stone quoins to corners. Central doorway with
moulded stone surround, four-centered arch and deep lintel with sunken
inscribed panel to centre. Three 5-light windows to either side with
moulded stone surrounds and mullions. First floor of lighter coloured
brick, three circular pitch holes with plain stone surrounds.
Kneelers to gable ends supporting finials with splayed lower bodies
and pyramidal caps. Similar finials to gable apex (these kneelers,
finials and the stone coping appear-to have been salvaged from the
original single storey building and reused when the additional storey
was built). A C20 addition adjoins to the left and the Coach House
(q.v.) to the right. Rear: C18 addition of three gabled projecting
wings of two storeys and single storey ranges of loose boxes between.
The gabled projections each have a circular hole to the first floor,
those to the sides being pitch holes and that to the centre the entry
to a pigeon loft.
Interior: Originally 16 stalls (the 3 to the extreme right having
been bricked off and destroyed in a C19 alteration). The terminating
posts to the stalls extend upwards forming columns and are joined
longitudinally thus forming an elaborate screen. Each post has an
octagonal pedestal supporting a Tuscan column with two astragal
mouldings to the lowerbay and abacus above. Semi-circular arches
spring from the upper body of each column and die into the
cyma-moulded lintel. Projecting 'key stones' with pendants and three
diamond-pointed panels to each side, open spandrels. Above the lintel
are fluted consoles corresponding to the columns and 'key stones'
below, with fretwork panels and modilion cornice between. Square
posts to rear of stalls with arched braces. Panelled ceiling to front
with strapwork and floral patterns in relief. The C18 upper storey
reuses the C17 trusses of the C17 roof which have angle braces.

The form of the internal screen is similar in many of its details to
the chapel screen at Cholmondeley Castle of 1655. The application of
these details to a stable makes this one of the most lavish buildings
of this date in Cheshire.