The Church of St Bertoline

A Grade I Listed Building in Barthomley, Cheshire East 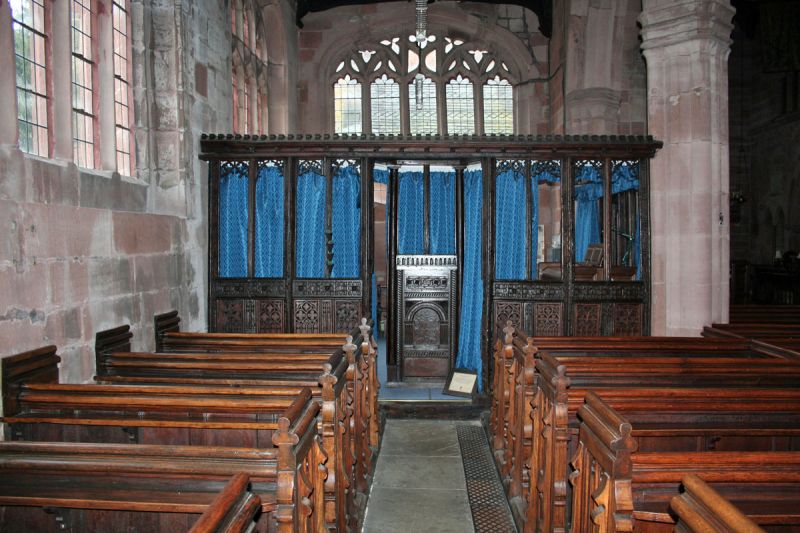 Parish church, late C15 nave and tower, chancel 1925-6 by Austin and
Paley but including C12 Norman doorway in north wall. Red sandstone
with lead roof. 4-bay nave, side aisles and narrower less lofty
chancel, in Perpendicular style. Square west tower with clasping
buttresses, gothic entrance with hood mould and pair of three vertical
panelled doors. The door opening is surmounted by a large 4-light,
stained glass Perpendicular window. There is a clock face facing
north and two-light "Y" tracery windows to all faces at bell stage.
The tower has a crenellated parapet with angle gargoyles and angle and
intermediate crocketted pinnacles. An entrance porch, on north side
of nave, still has the original stone holy water font. The north
aisle windows are four-light leaded with ogee tracery whereas those to
the south are three-light with stained glass. There are interwindow
buttresses. The clerestory has eight matching 2-light windows with
cusped heads both sides. There is a large five-light chancel east
window. The parapets of the aisles and nave are crenellated.
Interior: Aisle arcade piers are chamfered squares with attached
angle shafts and simply moulded caps. Elaborately moulded chancel
arch off pier with 3 shafts with rings. Chancel flanked north by
vestry and south by Crewe Memorial Chapel. This contains alabaster
C14 and C16 recumbent effigies of a knight and a former rector, a
marble figure of Lady Houghton by J E Boehm, a Victorian Gothic
monument to the first Lord Crewe, said to be by Nesfield, and two
large wall monuments to other members of the Crewe family. The
chancel-chapel wall has two arched openings fitted with high quality
metal grilles. The south wall of the chancel has twin arched sedilia
with marble shaft and level seats. The C17 oak reredos is now against
the south internal wall of the tower. A Perpendicular carved oak
parclose screen encloses the organ west and south at the east end of
the north aisle. Elaborately carved, panelled, slightly cambered, oak
ceilings to nave and aisles supported by consoles. The C19 chancel
ceiling is similar in style to the nave, but has level tie beams and
short posts to the principal rafters.