The Flaggs and Hamilton House, and Front Garden Walls and Gates 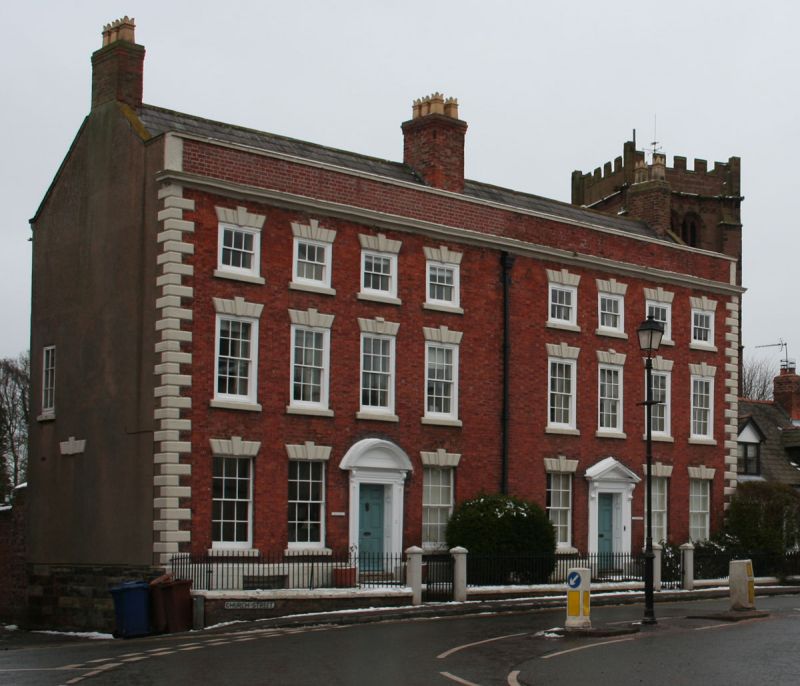 Entry Name: The Flaggs and Hamilton House, and Front Garden Walls and Gates

Pair of houses: dated 1756 on rainhead, later extensions to rear.
Flemish bond orange brick with buff sandstone dressings. Welsh slate
roof and 3 brick chimneys. Single-pile plan. 3-storey, symmetrical
8-bay front. Stone plinth with access to cellars. Rusticated stone
quoins, moulded cornice and plain blocking course. Windows are
12-pane sashes, ground floor recessed, remainder cased and flush, top
storeys 6-pane sashes. These have rusticated stone heads with raised
keyblocks (moulded over the doors) and stone sills. 3rd and 6th bays
have moulded wooden doorcases with panelled reveals. To the left is a
segmental pediment, to the right a triangular one. These contain
6-panelled doors approached by 2 stone steps. The houses are divided
by a central drainpipe with 1756 on the rainhead. The small front
gardens have low brick walls with chamfered stone copings and simple
iron railings. Each house has a gateway with square piers and
capstones and small wrought iron gates.
Interior: Hamilton House: entry into narrow hall with semi-circular
archway with raised keyblock and imposts. Only 2 main rooms with
staircase to rear. Drawing room has an original fireplace with rilled
pilasters and a simple frieze containing a modern grate. Dogleg stair
with square newels has crisscross balustrade in manner of Chinese
Chippendale staircases. Many of the doors are of 2 fielded panels in
simple surrounds, with some later 4 and 6-panelled doors. Extensive
cellars.

Dr A Gomme (unpublished) shows the very close comparison of this pair
with the north side of Abbey Square, Chester, which are contemporary
though a little grander. He believes they were built by the same
lessee, Taylor.