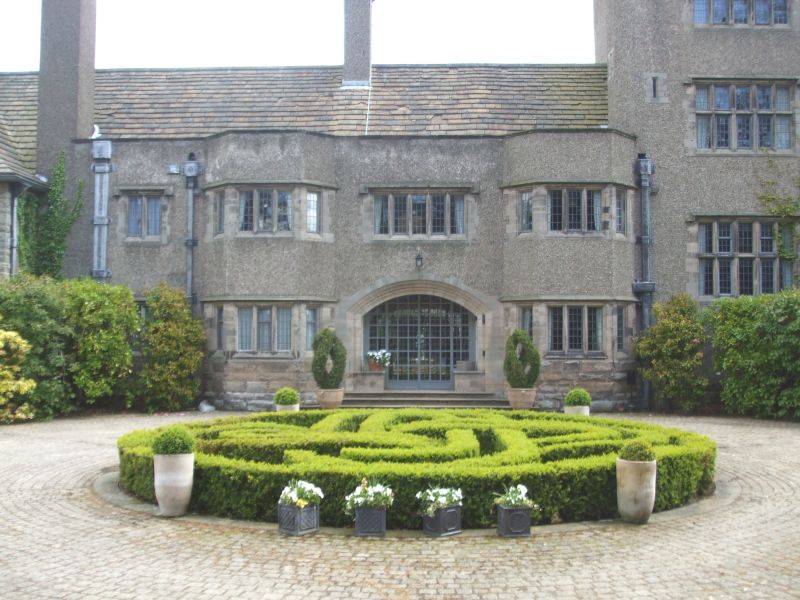 Large house now training centre: 1906-c1914 by C E Mallows for
Mr Lees-Smith then for Bruno Mond both of Brunner Mond, completed from
1912 for R A Prestwich of Burberrys. Pebble-dashed brick with buff
sandstone dressings, York stone-slate roof, tall pebble-dashed
chimneys. Neo-Vernacular style with Elizabethan flavour. Courtyard
plan. 3-storey symmetrical 5-bay south garden front. Rough stone
plinth, flush quoins and copings of the 5 triangular gables. Central
bay has a bold semi-circular projection through 2 storeys with an
11-light mullioned and triple-transomed window to great hall. Above
is a 5-light mullioned window and blocked oval light in the gable.
These are flanked by canted projections carrying pairs of tall diamond
stacks. End bays have canted 2-storey projections with mullioned and
transomed windows. 4-light mullioned windows above. 2nd bay has
recessed porch behind a screen of 2 fluted octagonal columns, carrying
a corbel table. Recessed mullioned and twin-transomed window with
moulded segmental head and 5-light mullioned window above. 4th bay is
similar except for a window where the entrance is.
2 and 3-storey, 8-bay west entrance front. Entrance at centre under a
broad moulded segmental arch is approached by 3 steps and contains a
door with small-pane glazing. 5-light window with label mould above.
To either side are 2-storey canted projections with similar windows.
To right in 6th bay is a tall flush staircase tower with flat top.
5-light mullioned and transomed windows and arrow slits in slightly
taller left hand portion. 3-storey portion at right end, and left end
bay is garage with wooden doors, stepping forward under hipped roof.
2 and 3-storey, 9-bay east front. Main part projects forward under
steep roof, and has lines of mullioned and mullioned and transomed
windows. A segmental headed window is in a hipped half-dormer and
there are 3 hipped dormers with stone-slate hanging. Right end 2
bays step forward under gables and have recent wooden windows.
Courtyard has cloister arcade on all 4 sides. These are of 3 segmental
moulded arches, the central one wider, the lower wall broken by a
shallow flight of segmental steps. At the centre of the courtyard is a
sunken circular pool with lead statue at the middle. Cloister carries
a balcony with coped parapet except for 2-storey, 5-gabled south side.
North side has similar partly glazed arcade behind. Good lead
rainwater heads throughout.
Interior: entry from cloister into main south range. This has a
passage along each floor with rooms to one side. Ground floor has
small square entrance hall under plaster dome, and with stone niches.
To right is open well oak staircase with turned baluster and square
newels carrying up as piers. Stairwell wainscotted throughout.
Passage to left of stone arches, wainscotted between. On the right
hand the sitting room has white painted bolection moulded and fielded
panelling, with recessed fireplace flanked by pairs of fluted
pilasters. Early-mid C18 style ceiling. At the centre is the great
hall open to 2 storeys. Pair of 2 large rectangular trusses with added
angle braces carry flat ceiling. Tall moulded segmental arch to bay
window. Similar smaller arches to inglenook fireplace and openings to
either side. Gallery on 3 sides has network of turned balusters,
strapwork details to panels and newels. Over the fireplace it is
carried on stone corbels, one an atlante; opposite it is carried on
wooden piers to form a dias canopy. Hidden stair from bay to
gallery. The Blue Room, a former study has a barrel vaulted ceiling,
plank and muntin panelling, and a simple oak chimney breast. Left end
room formerly dining room has bolection moulded polished marble
fireplace. At 1st floor, passage is timber framed with barrel vault
on heavy wooden trusses. Wood-mullioned windows to great hall. Small
anterooms at each end give access to main bedrooms and dressing rooms.
Pegged oak architrave and 2-panelled oak doors, simple fittings inside.
Top flight of stairs has minor stone staircase, with little stone
balcony, leading to roof. Top floor passage has pairs of cupboards
alternating with dormer windows, and a line of oak doors opposite.
Access to rooms in other ranges also from passages. These have oak
doors and simple tiled fireplaces, except for former billiard room at
north-west corner. It has a plaster dome and bolection moulded
panelling, and panelled recesses to the windows.

The pebble-dashed walls and gatepiers with ball finials around the
entrance courtyard and the adjoining entrance to the garage and its
stone revetment wall to the rear of the house are included in the item.