Number 99 and Attached Railings to Areas 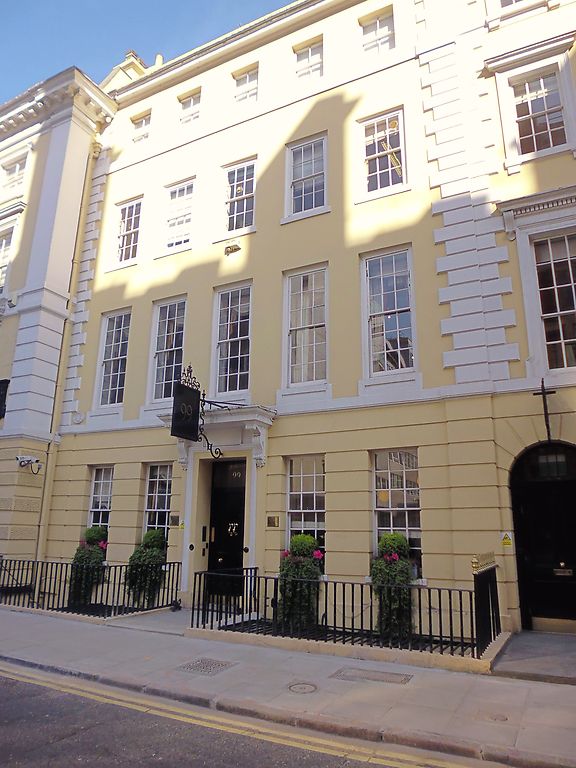 Terraced house. c1680-1700, refronted later C19. Stucco with
rusticated ground floor and rusticated quoin strip between
No.99 & 98 (qv). Bands at 1st and 3rd floor level.
EXTERIOR: 4 storeys and basement (4th storey a later
addition). 5 windows. Symmetrical front; square-headed
entrance with stone architraves, console bracketed
cornice-hood and double panelled doors with patterned
fanlight. Square-headed, recessed sash windows with exposed
boxing. Cornice and blocking course.
Rear elevation, apart from added top storey, retains its
original appearance. Plum coloured stocks with red dressings.
3 windows between closet wings which have their own north
windows at each floor and blind window recesses at the sides.
Windows and recesses with gauged flat arches except at
basement and top floor where they are cambered. Deep window
sills of stone except for the ground floor centre opening
below which the small set-forward of the basement storey is
raised to form a panel; this central window emphasised by a
stone bolection moulded architrave surmounted by a shaped
frieze and wood cornice.
INTERIOR: the plan of the interior is a prototype of the early
Georgian large town house. The 3-bay, front-lit, entrance hall
rises through the ground and 1st floor with the main stair of
3 flights set around a large well with the upper landing on
the east side. Stair with twisted balusters to a closed
string, with half balusters on the square newels and moulded
handrail. Chequered black and white marble hall floor. Ovolo
panelling in 4 heights with 2 heights and a dado rail to the
upper landing with box cornice. Central on north wall, an oval
window to the secondary stairs. Ceiling painting above stairs,
on plaster, depicting Bacchus and Ariadne, attended by 2
cupids, seen in the sky through an architectural margin
representing a cornice and consoles in perspective. Attributed
to Louis Cheron and unusual in a house of this type in London.
A secondary, dog-leg, staircase runs from the basement to 3rd
floor behind the main stair (and separated from it by a

panelled screen), lit by small light well at the rear. Twisted
balusters to a closed string with half balusters to the square
newels except in the 2 flights to the basement. Panelled dado
for full height. The ground floor back room (The Peacock Room)
extends the full width of the house and is lined with bold
raised bolection moulded panelling with dado rail and box
cornice. The rest of the house retains fine panelling and
features with minor alterations.
HISTORICAL NOTE: the house has been in professional use since
1820 when it was taken by the Regents Canal Company who may
have been responsible for the extra storey and re-fronting.
(RCHME: London, Vol. II, West London: London: -1925: 60).