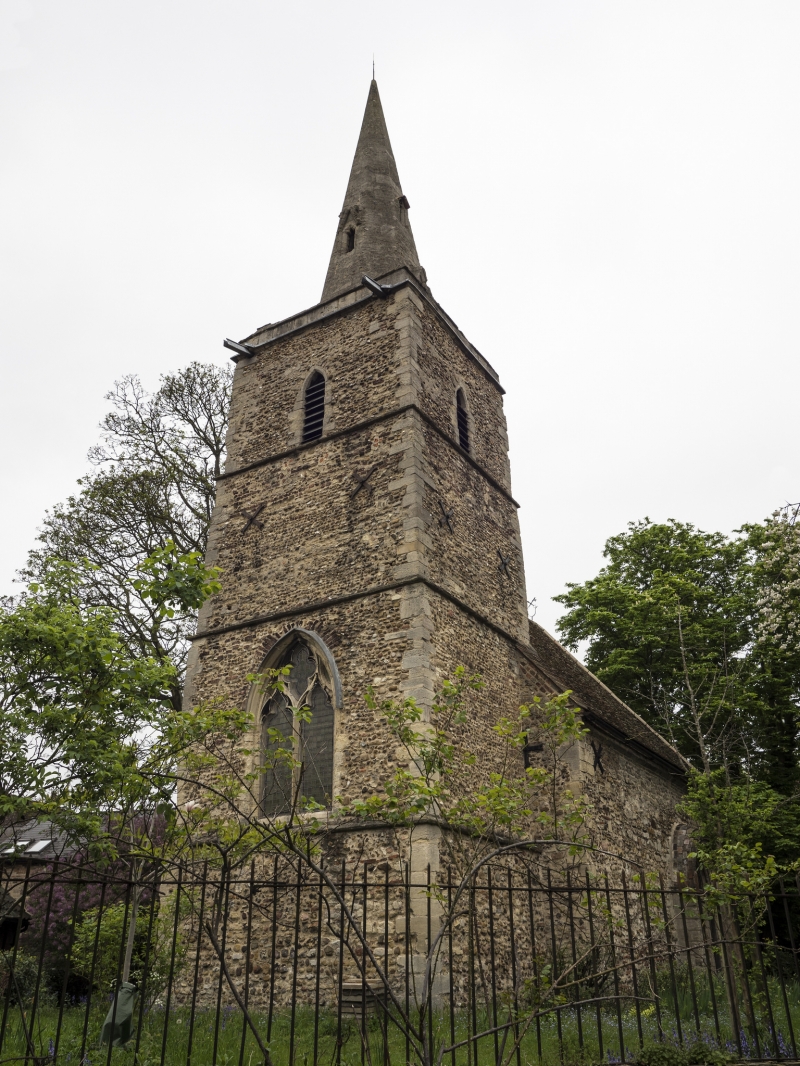 II*
The church is probably late C11 or very early C12 in origin, the date of the N door. The S door is late C12 or early C13, and the W tower is C14. By the mid C14 there was also a S aisle and porch, later demolished. The church was rebuilt on a smaller scale in 1781 using older materials and retaining the W end of the nave and tower. The E window was remodelled in the early C19. The church was restored in later C20.

MATERIALS: Flint rubble and stone with some later brick.

PLAN: Nave and W tower. There is no longer a chancel.

EXTERIOR: A tiny church with a disproportionately large tower, the result of C18 truncation. The tower is of three stages with a moulded parapet and a polygonal spire that forms an important landmark. The C14 W window is of two trefoiled ogee lights with a quatrefoil in the head and a hood mould. There are single light windows in the bell stage, and two gargoyles below the parapet on the W. The unified nave and chancel were rebuilt on a very small scale in 1781, reusing older materials including a late C11 or very early C12 N door with chamfered imposts, now blocked, and a late C12 or early C13 S door with roll moulded orders on detached shafts (one replaced in wood) with stiff leaf capitals. The 3 light W window with perpendicular style tracery was inserted in the early C19 replacing a C18 window. The gargoyle above the W window is probably late C18 or early C19. The roof is hipped over the east end. The distinctive weathervane bears the letters A P.

INTERIOR: The white painted interior is very plain, and surprisingly spacious for such a small building. The tall C14 tower arch has two chamfered orders, the outer continuous, the inner on polygonal shafts with moulded capitals and bases. The blocked N door is visible as a recess in the N wall. Simple late C18 roof with tie beams, the backs of the rafters boarded, and the whole painted white. The bell frame is late medieval.

PRINCIPAL FIXTURES: An outstanding C12 font: this is a square, lead-lined stone bowl with mermen holding their divided tails at each corner, on a cylindrical stem with a simple roll moulded base. E window has late C19 glass by F R Leach with yellow floral and geometric quarries. Two memorial tablets in the tower, one of the late C17 with carved drapery, the other of the early C18 with naïve fruit and floral swags.

HISTORY: There was significant Roman and Anglo-Saxon settlement in the area of St Peter's and early, possibly non-Christian burials have been found in the churchyard. A church was built here shortly after the Conquest in 1066, and the N door probably dates to the late C11. Always a small, poor church, by the mid C14, St Peter's had a nave, chancel, S aisle and porch and a W tower, and there was a guild in the church in the C15. In 1503 money was left for three windows on the N side. From the mid C17, the parish was religiously linked with that of St Giles, although it remained administratively separate. The aisle was demolished sometime after the Reformation. The church had new furnishings in the late C17 and early C18, and although in an acceptable state in 1743, was ruined by 1772. Fragments of pink, burnt limestone incorporated into the rebuilt walling may suggest an unrecorded fire. Despite proposals to demolish, it was rebuilt on a much smaller scale in 1781, when the nave and chancel were replaced with the present structure, and was used mainly as a chapel and vestry room for St Giles. Following a brief period as a Sunday School and children's church, and repairs in the mid C20, it became redundant in 1973. It is now administered by the Churches Conservation Trust.

REASONS FOR DESIGNATION
The Church of St Peter, Cambridge, is designated at Grade II* for the following principal reasons:
* Medieval parish church with late C11 origins and surviving C14 tower and spire.
* Outstanding C12 font.
* An unusual building history, involving a mid-Georgian rebuilding which retained elements of the earlier church while adding a distinctive hipped body to the tower.