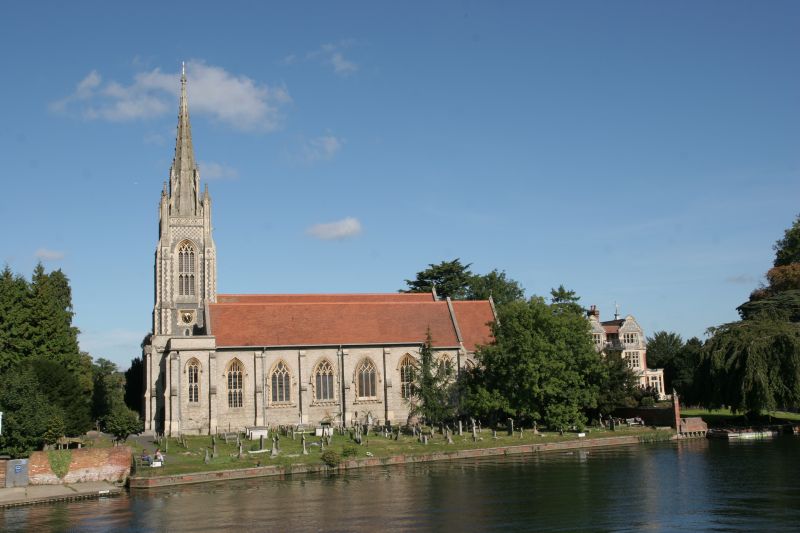 MATERIALS: the Inwood phase is in buff Staffordshire brick with Bath stone dressings; the Scott work is in knapped flint with stone dressings and some chequered flushwork decoration; tiled roofs.

EXTERIOR: prominently sited beside the Thames, next to Marlow's noted suspension bridge. It is designed in a loosely Perpendicular style, in two distinct phases: Inwood's pre-Victorian brick body, and Scott's late Victorian flushwork tower and spire. The W end features Inwood narthex, the central 3 bays broken forward, divided by buttresses and with a parapet screen decorated with blind quatrefoils. Tall, narrow chamfered doorways to each bay, the central bay with an ogee arch over decorated with crockets in a late Georgian manner. To N and S the narthex has narrow 2-light traceried windows with transoms. The tower rises above the narthex with angle buttresses terminating in pinnacles, clock-faces in sunk moulded frames; large 3-light transomed belfry windows and a flushwork frieze below a pierced parapet. Above this, the elegant stone spire has miniature flying buttresses and is decorated with crockets. Buttressed brick aisles with a mixture of narrow transomed windows and 3-light windows with Decorated style tracery and toothed quoins proud of the wall plane and square projecting blocks below the sills. The chancel, added by Scott in 1875-6, has diagonal buttresses and Decorated style traceried windows, the N and S windows being recessed under stone arches.

INTERIOR: finely proportioned and spacious, following Scott's interventions. The moulded chancel arch with nook shafts to the responds leads to a lower chancel. The 6-bay arcades (5 bays to the nave) have quatrefoil piers with moulded capitals and richly-moulded arches. There is a good open arch-braced roof to nave, boarded and canted, the braces on moulded stone corbels; crown-post and tie-beam roofs to aisles. This was added by Scott in 1889. The chancel has a canted boarded chancel roof, panelled and painted, in keeping with its rich fixtures.

FIXTURES AND FITTINGS: reredos of 1876 by Scott: this comprises a triptych of marbles, the outer wings rectangular and the central panel with a triple gable, containing tiled panels of the crucifixion. The chancel walls have a timber dado with blind arcading and cresting. The sanctuary has an encaustic tiled floor and painted metal and timber sanctuary rail. Choir stalls with shaped ends and open traceried frontals with pendants. Late C19/early C20 timber parclose screens to SE chapel. The font has a deep stone bowl, decorated with crosses, on a base with marble shafts; a very tall polygonal font cover with ogival spire. An unusually large and elaborate 1863 stone and marble pulpit by GE Street, integral with the low coped stone chancel screen: it is is a round, open arcaded enclosure in two stages, with an arcaded ring of polished limestone (serpentine and Plymouth marble) shafts, standing on a lower stage carried on 4 shafts of pink sandstone. Nave bench ends with wavy tops. An impressive run of Victorian stained-glass windows, mostly by Burlisson and Grylls, including the five in the chancel of 1876, one window by Kempe. Good war memorial window in N aisle. Many wall monuments, and a number of interest: the oldest is to William and Ketheryne Willoughby and family, d. 1597, with small kneeling figures facing each other over a prayer desk, and set within a Corinthian frame with strapwork. That to Sir Miles Hobart MP (d.1632, and apparently paid for in 1647 by the House of Commons, unusually) comprises a half-length frontal bust between curtains: below the apron is a relief of his death in a coaching accident. Other monuments by Nollekens and by Westmacott junior. Father Willis organ of 1876, rebuilt and overhauled several times since.

HISTORY: the present building was commenced shortly after the opening of Marlow's noted suspension bridge by William Tierney Clark, in 1831. Designed in a characteristic late Georgian manner and built of brick, it is a clearly pre-Tractarian design to which numerous additions were made later in the C19, including the ritually essential addition of a chancel, and the replacement of Inwood's wide trussed-roof interior with a more conventional aisled arrangement which removed the galleries as well (as shown in a photo of 1877 in the National Monuments Record). The initial architect, Charles Frederick Inwood (1798-1840), was the second son of the well-known Neoclassical architect William Inwood: he showed drawings for All Saints at the Royal Academy in 1832 and 1834. John Oldrid Scott (1841-1913) was a younger son of Sir George Gilbert Scott, and was a distinguished church architect in his own right, responsible for a very large number of restorations; as Oxford Diocesan Architect from 1881, he had strong local connections.

REASONS FOR DESIGNATION:
All Saints, The Causeway, Marlow, rebuilt by CF Inwood in 1832-35 with later phases by John Oldrid Scott, is designated at Grade II* for the following principal reasons:
* Architectural interest: the building has a fine exterior in two distinct phases, and possesses a spacious and little-altered interior
* Fixtures and fittings: there are a number of interesting monuments, especially that to Sir Miles Hobart, as well as stained glass of high quality and a pulpit designed by GE Street
* Historic interest: the church has played a prominent part in the life of the town, as reflected in its fabric
* Group value: the church has very high townscape value, and forms a fine group with the notable Marlow Suspension Bridge, which is nearly of the same date