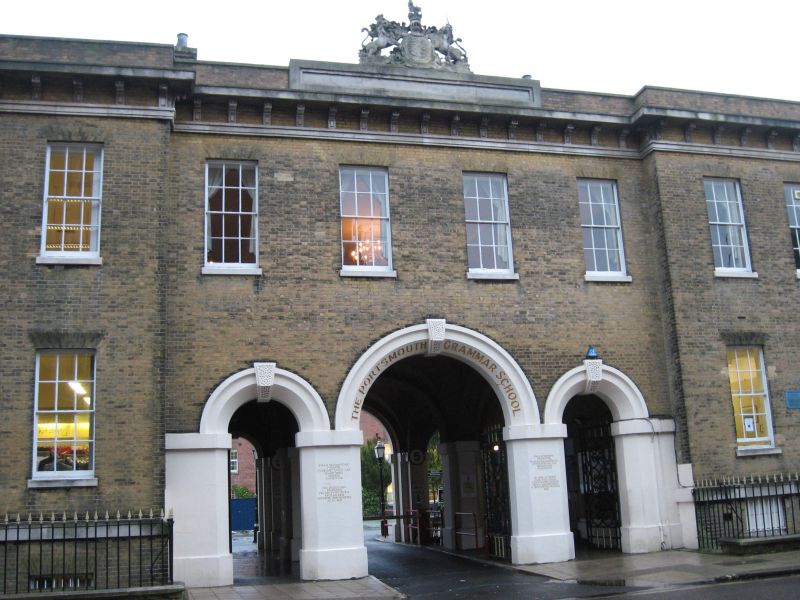 Formerly known as: Cambridge Barracks HIGH STREET.
Barracks officers' quarters and mess, now grammar school.
c1855-60, by the Inspector-General of Fortification's office;
school since 1926. Yellow stock and grey bricks. Shallow
pitched Welsh slate hipped roof, brick stack with moulded
stone cap on left of bays 4/5, 8/9, 13/14, 18/19. Late
Georgian style.
PLAN: double-depth plan of 4 room units divided by chimneys
and separated by transverse passages with rear doorways;
former mess in deeper section at left-hand end.
EXTERIOR: 2 storeys and basement. 40-window range. The 2
flanking bays on each side of the central open archway, and 5
bays at each end, project slightly. At centre is a wide
splayed stone-framed round archway with impost, vermiculated
keystone and plinth, similar lower and narrower arched
openings each side, to a vaulted through passage. On each side
are eighteen 6/6 pane sashes each set under a flat-gauged
brick head with stone sills; 40 similar first-floor sashes.
Stone plat band, cornice with ornate stone brackets and stone
coped parapet. At centre above parapet is a royal cartouche in
stone with supporters.
Rear has steps across basement areas up to doorways, and
flat-headed 6/6 pane sashes, as the front. Officer's mess set
forward with a central round-arched doorway with radial
fanlights and tripartite window above.
INTERIOR: has large former mess, now library, on first floor,
with an axial central stair with cast-iron balusters to a
central axial passage; contains original doors and
plasterwork.
SUBSIDIARY FEATURES: attached cast-iron spear-headed forecourt
railings.
HISTORY: contained officers' and servants' rooms, with
kitchens and mess rooms. Portsmouth Grammar School, founded in
1732, took over the former officers' barracks in 1926. With
the other sections of the old Cambridge Barracks (qqv), this
is a good and complete mid C19 example. It is the only
remaining one from an area just inside the old Portsmouth
Lines with a large concentration of barracks in the C19, and
the irregular layout is a rare survival reflecting the former