The Parish Church of Holy Trinity 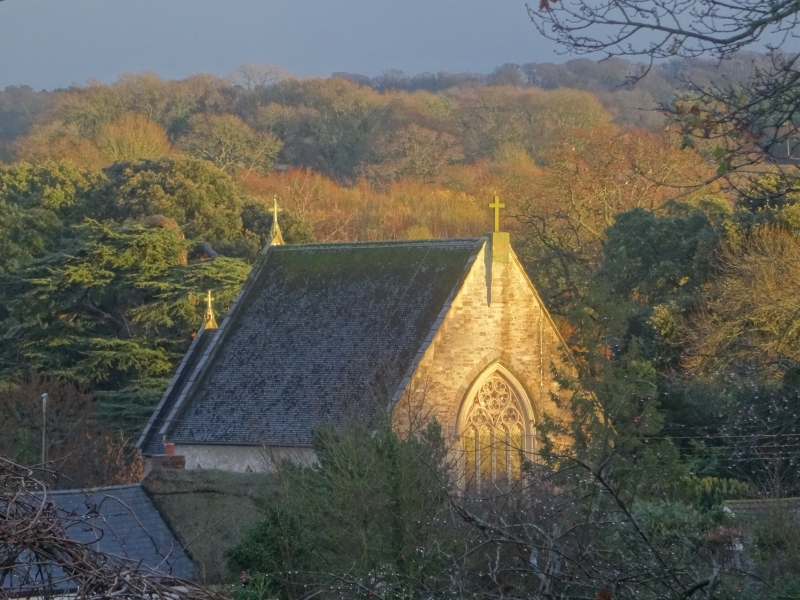 Parish church. 1844; architect unknown; built at the expense of Marianne Pidsley,
and consecrated in 1844 when Woodbury Salterton became an ecclesiastical parish
distinct from Woodbury. Random rubble; some of the stone, especially at the west
end and for part of the north wall, is Salcombe Regis stone re-used from the
medieval tithe barn at Woodbury demolished for the purpose; also some Heavitree and
Exmouth sandstone. Decorated slate gabled-end roof with heavy gable coping. Nave,
chancel, south porch, north-east vestry. The west end gable was originally
surmounted by a bellcote. South side, 4 bays to nave including the porch; windows
of 2 lights of geometrical Decorated tracery; buttresses with 2 off-sets, set back
at angle; north side 4 identical window bays; large 4-light west window; cusped
lancets to chancel (which is much lower than, and carefully distinguished from, the
nave); 3-light geometrical Decorated window. Crisp stonecarving to hood mould
terminals and numerous biblical texts, even on the buttresses.
Interior: tall, with arched-brace roof with kingposts; chancel arch of Heavitree
originally painted to resemble Beer stone. Contemporary furnishings. The church is
strikingly tall and makes an impressive contribution to the village scene.