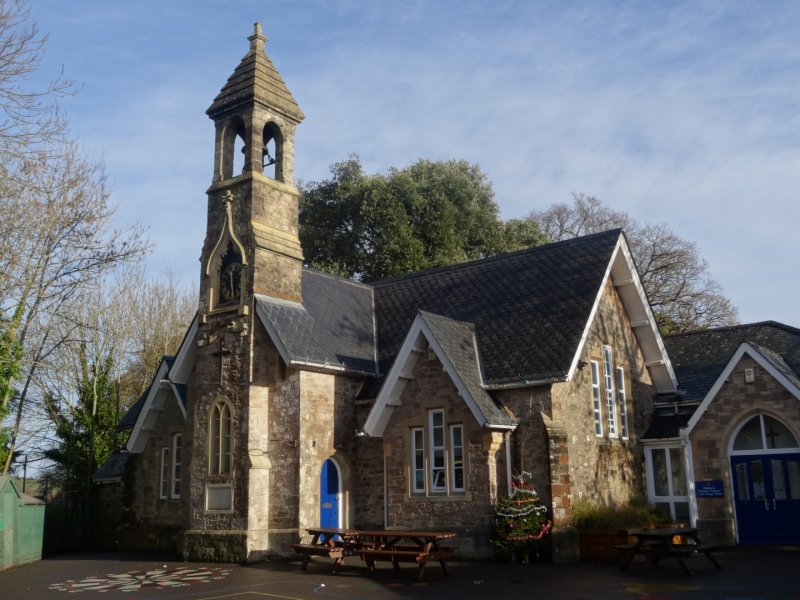 Primary school. Circa 1847; built at the expense of Marianne Pidsley, architect
unknown. Dressed rubble limestone with some volcanic trap; gabled-end fish scale
pattern roof. Main 2-cell range and a central rear wing, with school rooms to
right and left entered from central projecting porch with separate entrances either
side and clock tower with bellcote above. The 2 school rooms have projecting front
bays to left and right of porch, the left-hand bay with late C20 single-storey
extension. Single-storey.
Front: symmetrical; the 3 Projections are all separately gabled; those to either
side with 3 square headed lancets, the centre lancet taller than the others; the
left-hand projection has been partly obscured by a late-C20 flat roofed low,
single-storey extension. Central porch projection, its gabled-end roof almost as
tall as the roof of the main range; 2 small windows in the gable wall flank the
tall external clock tower, this has off-sets, a pointed 2-light window; a clock
recessed in an ogee-headed canopy, cusped with a hood mould and finial and an
informal scroll with motto beneath the sill; the whole capped by an open bellcote
with pyramidal roof and pinnacle. Simple pointed doors to either side of central
projection. Diagonal angle buttresses to main range; side elevations with triple
square-headed lancets, and - to the left - a Verandah with arched timber supports.
An attractive and slightly quirky design; engravings show that it was designed to
group with the church and vicarage.