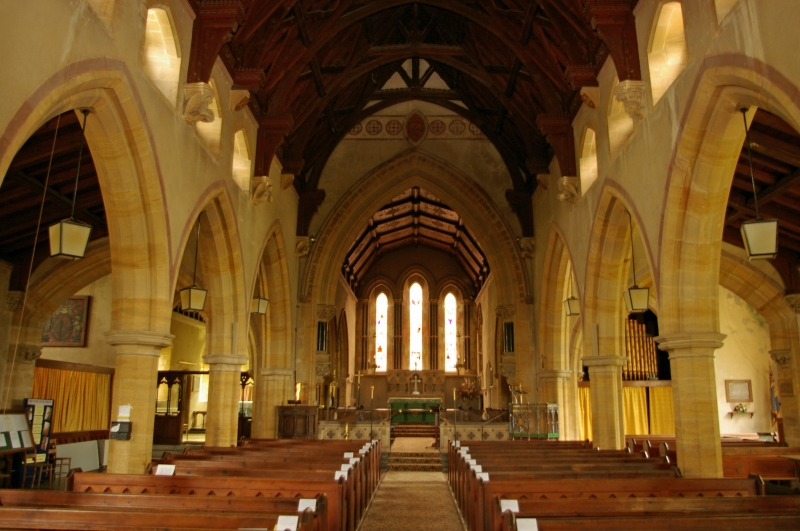 The Church of St Andrew, Chardstock, which retains some C15 fabric, but which was almost completely rebuilt in Decorated style in 1864 by James Mountford Allen.

Church, almost completely rebuilt in Decorated style in 1864, but retaining the C15 south aisle, south porch, and part of the south transept, which may be older. The architect was James Mountford Allen; stone carving was undertaken by Grassby of Dorchester.

MATERIALS: squared and coursed chert with freestone dressings. The C15 parts are of red Devon limestone ashlar. The roofs are patterned with red and black terracotta tiles; there are concrete tiles to the nave.

EXTERIOR: the different parts of the church are in different styles, to suggest evolution over time, working forwards to the original C15 area of the building to the south, with the east end being in the Early English manner, and the north side and tower being early Decorated. The gables have cross finials, and a roll-moulding runs beneath the windows; in the north and west parts of the church, the windows have geometrical tracery, and openings have hoodmoulds with headstops. The buttresses are mainly angle buttresses, with some diagonal buttresses. The church has a strong west tower in three stages, with offset diagonal buttresses. The west door, approached by polygonal stone steps, has elaborate foliate ironwork hinges, and is set within an opening framed by red sandstone columns; above is a large window with intersecting trefoil tracery. In the second stage, a narrow ogival opening above which is a circular clock with trefoil centre and hoodmould; this feature is repeated on the north face of the tower. Each face of the tower has a louvred belfry opening framed by engaged colonnetes of red sandstone. The parapet is pierced with trefoils, and there is a corbel course with a trefoil arcade resting on carved heads. There are gargoyles representing mythic beasts to the corners. Attached to the north side of the tower, in the angle with the nave, a polygonal stair tower with a pointed trefoil doorway and pyramidal roof. The nave is of four bays with clerestory, the clerestory openings being trefoil, quatrefoil, cinquefoil and sexfoil. At the east end of the nave, over the chancel arch, a small bell-cote. The north porch is gabled, the doorway having a moulded arch on engaged columns; the boarded door has hinges of wrought iron. The porch is lit by paired ogee-headed trefoil windows to east and west; there is chevron and nailhead carving to the cill beam of the roof The inner doorway has paired colonnettes of red standstone with stiff-leaf capitals; this door has elaborate hinges, the design being different from those on the west door. The gabled north transept has an elaborate window with plate tracery. The north chapel has two windows to the north, separated by a door, and a large window to the east with intersecting tracery; to the north-east corner is a diagonal buttress of complex gabled design, with offsets, and small carved birds. The east end of the church has three lancet windows, with a trefoil opening above. The vestry and organ chapel, situated between the chancel and south transept, has an entrance to the south, and an external stack with pyramidal capping. This part of the building has narrow windows with trefoil heads; there is a rose window in the east gable. The west wall of the south transept appears to pre-date the C15 work, having a Perpendicular window, its headstopped hoodmould cut off to the north by the south aisle; this wall is of chert rubble. The rest of the south transept is C19, with a large Perpendicular window to the south. The C15 parts of the church have square-headed windows with cinquefoil lights, and there is a crenellated parapet to the aisle and porch. The south wall of the south porch was largely rebuilt in the C19, using bands of chert, replacing the door with a window to the same pattern as those in the aisle; there has been some replacement to the stonework of the aisle windows. The south porch has setback buttresses.

INTERIOR: the interior of the church has been little changed since it was built, with the majority of the original fittings being designed by, or forming part of the design of, James Mountford Allen. There is much use of different stones, and Devon and Cornish marbles; the walls are rendered. The double-aisled nave has pointed arcades with octagonal piers, the arches defined by red sandstone borders; the capitals to the western piers have foliate carving. The chancel, sanctuary and aisle walkways are geometric tiles set in elaborate patterns. The nave is lit by the geometrical clerestory windows, set in pointed segmental-arched openings. The arched timber trusses of the nave roof are supported on corbels carved with angels playing musical instruments. The aisles have plain timber roofs on foliate corbels. In the south aisle is a C15 doorway with a segmental arch containing a C19 door giving access to the south porch. There are pointed segmental arches between the aisles and transepts, on carved corbels. Within the chancel arch, corbels of heads from which sprout leaves and flowers, supporting triple shafts of black Devon marble with richly carved capitals. Above the chancel arch is a painted band with quatrefoils to either side of a vesica. Separating the nave from the chancel, a dwarf stone screen, ornamented with quatrefoil panels of coloured marbles, and studded with marble bosses, supporting panels of open ironwork. The wagon roof of the chancel, with foliate bosses, is richly painted in Medieval style. The double sedilia to south has pointed trefoil heads on shafts of black marble; above, the window is enclosed by a trefoil-headed niche with foliate carving around the head, supported on shafts of grey marble. A trefoil-headed niche to the north has a shelf supported by a corbel carved with hops and wheat. The altar rail rests on balusters of scrolled brass with floral motifs, studded with coloured glass. The reredos is of a piece with the chancel screen, being of Caen stone with coloured marble quatrefoils and bosses; the upper stage takes the form of an arcade with coloured marble shafts supporting trefoiled arches beneath gables, framing emblematic carving in quatrefoils; the central niche, backed with alpha and omega symbols, encloses a cross with marble bosses. The east windows contain glass depicting the life of Christ, designed by Allen and executed by O'Connor. Hanging in the chancel, two brass and iron chandeliers, of coronet form with central pendent. To the south side of the chancel, a brass plaque commemorating Charles Woodcock, vicar of the parish at the time the church was rebuilt in 1864, and later Canon of Salisbury. An arcade dividing the chancel and the north chapel has clustered shafts of alternating marble and limestone, with carved capitals, and carving to the arches. The north chapel, originally designated as the chapel of St Andrew's College, Chardstock, was furnished in the 1890s in memory of a former church chorister, and those educated at St Andrew's College: the scissorbeam roof has decorative painting, and there is an open timber screen in Devon style. The organ chapel and vestry are to the south of the chancel; the organ has C19 stencilling to the pipes; the interior of the vestry was not inspected. There is a vestry area in the north transept, where a small kitchen has been installed. In the north transept, originally designated the Tytherleigh Aisle, is a war memorial plaque, commemorating the fallen of both world wars. The nave and aisles retain their pews, the front pews having panels with trefoil decoration; the ends are shaped and chamfered. There is a matching vestry screen, and bookcase. The front choir stalls have scrolled foliate carving to the ends and decorative back panels; the second row is plainer. The polygonal pulpit, reached by steps to the south of the chancel arch, is of brass and iron openwork, partly painted, with delicate foliate scrolls, and the inscription 'we preach not ourselves but Christ the lord'; this rests on a base of red and black Devon marbles. To the north side of the chancel arch, a second, Jacobean, pulpit. There is a lectern with a twisted brass baluster, supporting a wooden bookrest pierced with a quatrefoil. The church's Victorian font stands to the west of the door, and is in neo-Norman style, having a square basin with carved roundels, resting on a massive stem with chevron carving, and four marble columns. The original Norman font, returned to the church in 2010 following its 1864 displacement, stands to the east of the door, and is of similar form though smaller scale, the squared granite basin, decorated with an arcade, standing on a square stem with outer sandstone columns.

SUBSIDIARY FEATURES: the gabled lychgate, to the north of the north porch, has a king-post structure with a tiled roof resting on a high stone plinth; the timber gates have open pointed arches and quatrefoil piercing. A flagstone path leads to the north porch.

The Manor of Chardstock was owned by the bishops of Salisbury, and The Court, standing to the south of the church, was formerly a manor house of the bishops. The origins of the Church of St Andrew lie at least as far back as the C15, from which the south porch and aisle remain; part of the south transept may be older. The church was rebuilt, incorporating those parts, in 1864, by James Mountford Allen (1809-83). Allen, born at Crewkerne, and trained at Exeter before going to London to work in the office of the Devonian architect, Charles Fowler. He returned to Crewkerne in 1856, and established an extensive practice as a church architect, working on a number of restorations and extensions, as well as new buildings; St Andrew's was one of his best-known churches. Built to accommodate 577 worshippers, the church, as first proposed, was to have a broach spire, but this is thought never to have been constructed.

The Church of St Andrew, Chardstock, is listed at Grade II* for the following principal reasons:

* Architectural interest: as a complete and complex mid-Victorian design by local church architect James Mountford Allen, incorporating noteworthy C15 elements within a plan suggestive of evolution;
* Interior: for its lavish interior, with good quality carving, employing a variety of local stones, and a harmonious suite of furnishings making use of rich materials;
* Intactness: together, the church building, decoration and fittings survive as a remarkably complete realisation of a single architectural project;
* Group value: with other listed buildings in the vicinity, particularly the group of six chest tombs in the churchyard, the Old Vicarage, The Court, and St Andrew's School.