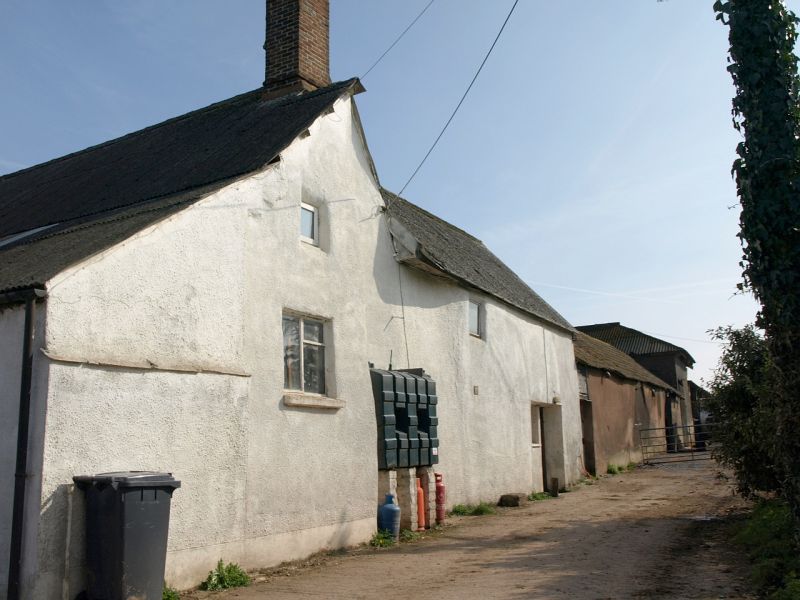 Farmhouse. Probably early - mid C16 with major later C16 and C17 improvements,
modernised in the late C19. Plastered cob on low stone rubble footings; stone
rubble and cob stacks topped with C19 and C20 brick, one including a stone rubble
chimneyshaft; corrugated asbestos roof.
Plan and development: L-plan farmhouse. The main block faces south. It has a 4-
room-and-through-passage plan. The right (east) end is the lower end but it
contains a parlour with an axial stack backing onto the passage and beyond it a
narrow service room at the end. In the late C19 the latter was converted to a potato
store and sealed off from the parlour but before was probably a buttery or cellar.
The winder stair off the passage has a late C17 structure but the balustrade was
replaced in the late C19. The other side of the passage is the dining room, the
former hall with a projecting rear lateral stack, and at the left (west) end a large
kitchen with projecting gable-end stack. A dairy block with unheated servant
accommodation above projects at right angles in front of the left end.
Almost certainly the house began as some form of open hall house but the early
structural history is hidden because the main block roof is inaccessible. Indeed,
throughout the house much of the structural carpentry and early features are hidden
behind C19 and C20 plaster. The present layout appears to be the result of a major
late C17 refurbishment of the house.
Farmhouse is 2 storeys with secondary lean-to outshots across the back.
Exterior: irregular 3-window front of various C20 casements, the latest made of
uPVC. The potato store doorway at the right end contains a C20 plank door. The
passage front doorway is right of centre and it contains a late C19 part-glazed 6-
panel door. On the inner side of the dairy block there is an unglazed C18 flat-
faced mullion window. At the back of the kitchen is an original doorway, its lintel
is chamfered with scroll stops and contains an old plank door. (There is another
similar doorway at the front between kitchen and dairy block). Above the rear
doorway is a late C17 oak-framed window containing rectangular panes of old glass;
it is now sheltered under the outshot roof. Main roof is gable-ended.
Interior: is largely the result of C19 and C20 modernisations and many features are
hidden behind plaster. Nevertheless the early layout survives intact and it seems
that the modernisations were essentially superficial. Those features which are
exposed appear to be late C17.
The partition between the parlour and potato store/former buttery is close-studded
and the half beam against the end wall is chamfered with step-nick stops. In the
parlour the crossbeam is boxed in and the fireplace is blocked. The main stair
rises from the passage alongside the parlour stack. The balustrade is late C19 but
the structure is late C17. There is an original 1-panel door to the cupboard under
the stairs. (On the back is written a list of births to the Harris family in the
early C18 including information about each baby's weight). The dining room/former
hall has plain chamfered crossbeams and the fireplace here is blocked. The kitchen
crossbeams are chamfered with scroll-nick stops and the large fireplace here is
blocked. The ceiling of the dairy has been lowered in the C20. The roof of the
dairy block is carried on side-pegged jointed cruck trusses with lap-jointed
collars. The roofspace over the main block is inaccessible although side-pegged
jointed crucks show below ceiling level and maybe an A-frame truss over the kitchen.