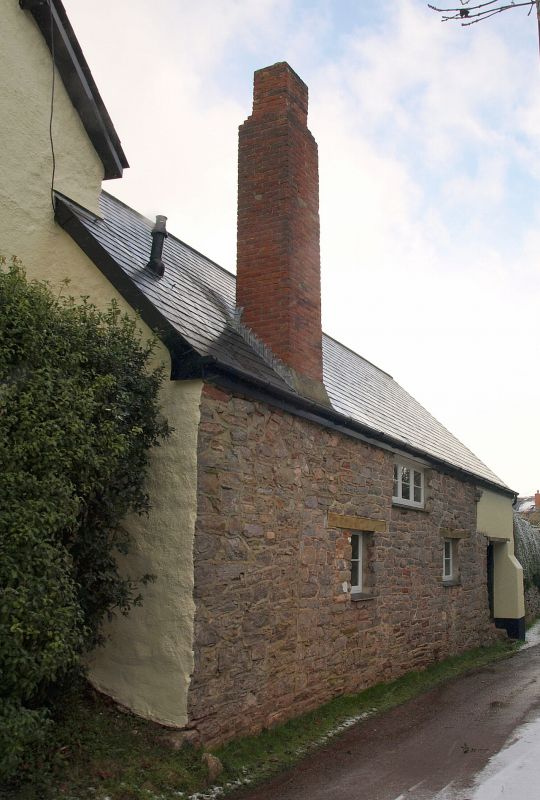 SX 86 NE KINGSKERSWELL NORTH WILBOROUGH
3/180 Orchardlea
-
GV II
House, originally farmhouse. Apparently late medieval rear wing, main house is
probably C17 remodelled in late C18 with C19/C20 extensions. Rendered rubble
walls, expose to part of wing. Gable ended slate roof corrugated iron to rear wing.
Lateral brick chimney shaft to front of rear wing. 3 brick stacks to main block,
one at left-hand gable end, one axial and one lateral at rear of right-hand end.
Complex development pattern. Rear wing is earliest part, probably circa late
C15/early C16 with open hall and central hearth, which had lateral stack inserted at
front probably in C16; the plan of this part is now unclear as part of it is used
as an outbuilding. In the C17 it appears that a 3-room and through-passage plan
house was added at right angles. The hall heated by an axial stack at its inner
end, the inner room by a gable end stack and the lower room, to the right, by a rear
lateral stack. In the circa late C18, this block was remodelled internally and
refenestrated; at this stage it is likely that the older rear wing was relegated in
part to a non-domestic use. C19 outshuts added along rear wall, extended on first
floor in C20.
2 storeys. Asymmetrical 4-window front. First floor windows are all circa late C18
16-pane hornless sashes. On ground floor to left and right ends are 2-light sash
windows, each light 12 panes, C20 facsimiles, contemporary tripartite sashes, all of
these have horns. Towards right end is porch with leanto slate roof and trellised
sides. Behind it is circa late C18 6-fielded panel door, top 2 panels glazed.
Contemporary doorcase has panelled reveals and flat pilaster either side, with
fluted frieze and cornice. Rear wing behind right-hand end projects onto the road t
the right with wide doorway at its right-hand end and 2 blocked ground floor
windows.
Interior of rear wing contains vestiges of face pegged jointed crucks (the blades
have been removed). One survives and appears to be smoke-blackened with mortices
for threaded purlins, and with probably morticed, cambered collar. The other
trusses are straight principals with lapped and pegged collars. The fireplace has
been plastered over but has a large opening.
The front block has visible features dating from the C18 remodelling. The lower
room chimneypiece has a moulded cornice with projecting plaque to frieze. This room
has an unusual panelled door with 4 square panels at the top and 4 triangular ones
underneath. The hall has a boxed in central cross-beam. Both rooms have fielded
panel shutters.