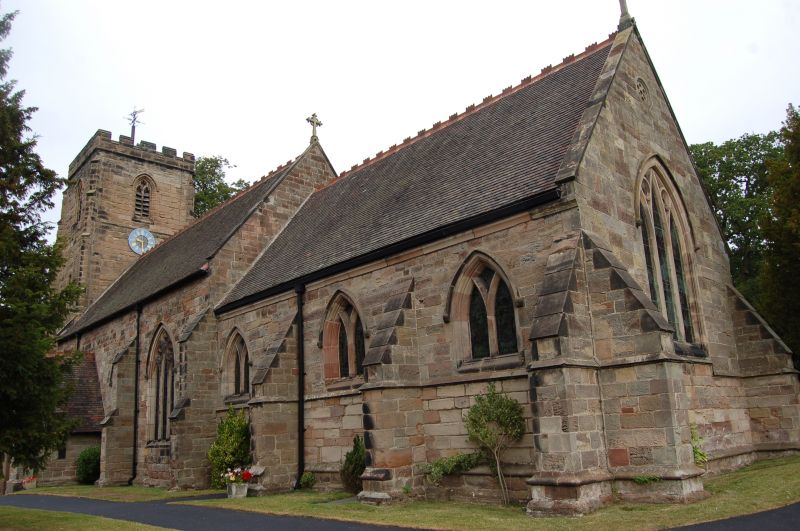 Find accommodation in
Coton in the Elms

Parish church. C13 with C15 tower, mostly rebuilt in 1877 by
Arthur Blomfield, and with early C20 north vestry. Tooled
ashlar with moulded stone plinth and plain tile roofs with
crested ridge tiles and stone coped gables, topped by ridge
cross to nave. Three stage western tower, nave with north
aisle, north vestry and south porch, and lower chancel. Tower
has full height stepped angle buttresses to all corners and a
chamfered band between second and third stage. West elevation
has pointed 3-light window with C19 Dec style tracery and
hoodmould and clockface over to second stage. South elevation
has small single light window to second stage and north
elevation is blank. Above, the bell stage has narrow 2-light
louvred panel traceried pointed bell openings in cavetto moulded
surrounds with returned hoodmoulds to all sides, plus a clock
face below eastern opening. Above again there is a coved
stringcourse and embattled parapets, plus a metal weathervane.
North aisle has a Y-tracery pointed C19 west window with carved
head stops to the hoodmould, and a stepped angle buttress to
west corner. North elevation of aisle has double gabled vestry
to west end with pointed western door, pairs of adjoining
lancets to each northern gable and a 2-light flat headed east
window with cusped lights, also clasping buttresses to all
corners. To east the aisle has three pointed C19 windows, each
with stepped triple lancets plus quatrefoils in the spandrels,
and stepped gableted buttresses between and to either end. East
wall of aisle has pointed 2-light C19 geometric tracery window.
Chancel has a continuous moulded sill band and deep buttresses
between each window and to the corners. North elevation has two
C19 pointed Y-tracery windows, east elevation has larger version
of 3-light north aisle windows and south elevation has three
moreY-tracery windows plus moulded pointed doorcase between
western windows. South nave elevation has 3-light pointed C19
window with stepped lancets below pierced quatrefoils to east
and Y-tracery window to west with gabled south porch beyond.
This has a moulded pointed door with oval niche above carved
with the Lamb of God. To either side the porch has trefoil
headed lancets and inside there is a plain pointed door with a
continuous outer moulding, and carved keys in trefoil niche
above. Beyond to west there is another C19 Y-tracery window.
To either end and between the windows there are stepped
buttresses. All C19 openings have hoodmoulds with carved head
stops. Interior has four bay C13 north arcade with pointed
double chamfered arches dying into octagonal shafts over the
capitals and octagonal piers and moulded capitals. Tower has
tall continuous triple chamfered arch and chancel has C19 double
chamfered arch on polygonal responds with moulded capitals.
North aisle has roll moulded pointed arch with soffit on column
corbels with stiff leaf capitals, into the north organ bay and
chancel has similar arch to north, plus hoodmould with carved
head stops. All north aisle and chancel windows have chamfered
inner arches on attached colonnettes, and chancel also has hoods
with carved head stops to all windows, plus a continuous sill
stringcourse. Chancel roof has C19 scissor trusses, and nave
and aisle have arched braced trusses. North aisle also has
segment headed door into the vestry. Most of the fittings in
the church are simple, the chancel has a stone reredos with
mosaicked wall behind and an ogee headed piscina to south, plus
late C19 metal and wooden altar rails and late C19 timber choir
stalls and organ. Across the chancel arch is a plain low stone
screen and to south in the nave is a late C19 octagonal wooden
pulpit with painted saints in trefoil headed panels, on a stone
base. North aisle has early C20 war memorial screen across
eastern arch and late C19 bench pews. Similar pews in nave and
similar date octagonal stone font to west end of nave with
diaper panels to each side of the bowl. Across the tower arch
is a mid C20 wooden screen. The most interesting monument is
the early C16 moulded four-centred arched tomb niche to north
side of the chancel with re-set alabaster slab incised with
illegible inscription and a figure, to Roger Doulton who died
1500. In the organ bay there are several early C19 slate and
white marble wall memorials to members of the Gresley family and
a classical aediculed white marble memorial of c1792 to Thomas
and Elizabeth Gresley. Below this there are two re-set white
marble slabs, one to Hannah Vincent c1772 and the other to
Elizabeth Gresley c1759. North aisle has one ceramic and one
enamelled brass wall plaque, the former c1872 to Mary Birch and
the latter c1912 to Ruth Jeanette. It also has two painted
charity boards of c1678 and 1669. The nave has a brass plaque of
c1912 and the tower has several painted and embossed glass
plaques recording the peals rung between 1909 and the present
day. Much of the stained glass is commemorative. The east
window and reredos commemorate John Woodhouse who died 1878, the
south-east chancel window commemorates Isabella Robertson who
died 1899 and central and western windows to south side of
chancel are placed there in memory of Rev Gresley who died 1897.
North east chancel window of c1914 is in memory of Constance
Twiss and central south nave window has c1922 stained glass with
inscription 'Virtus sola nobilitat'. North aisle has east
window of 1899 commemorating Thomas Carter and west window with
re-set medieval glass to the top including a small heraldic
device.