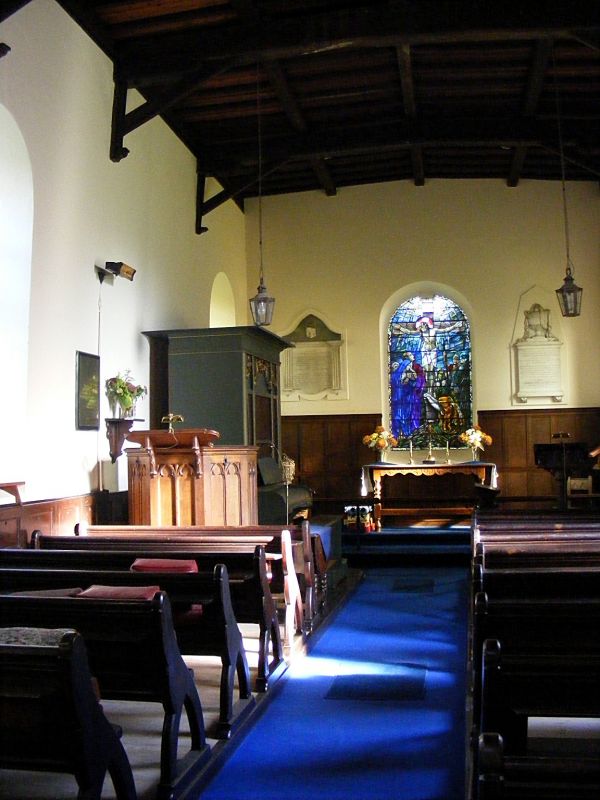 Church. Mid C18. Coursed limestone with sandstone dressings. West tower, nave
and chancel in one. West tower, plain lower stage with slit staircase windows
to north and south. West porch with flat hood and two Tuscan columns. Doorway
with semi-circular moulded arch with projecting keystone and imposts. Six
panelled, raised and fielded double doors. Shallow bell stage, divided by a
string band. Angle quoins and an elongated circular bell opening to each face.
Cornice above. Octagonal dome surmounted by a stone lantern. Nave and chancel
with quoins and cornice. North and south elevations each with three round-arched
windows with raised stone surrounds, imposts and keystones. Similar east window.
Plain interior altered in the C19. West gallery with panelled front, on two
slender iron columns. No division between the nave and chancel. Panelled dado.
Several C19 brasses on the north wall, to members of the Goodwin family. One
to Francis Goodwin 1808-1895 and one to Richard Goodwin-Gladwin 1895, signed by
James Hardman & Co of Birmingham. Stained glass in the east window 1926 by
A J Davies of the Bromsgrove Guild. Painted organ case.