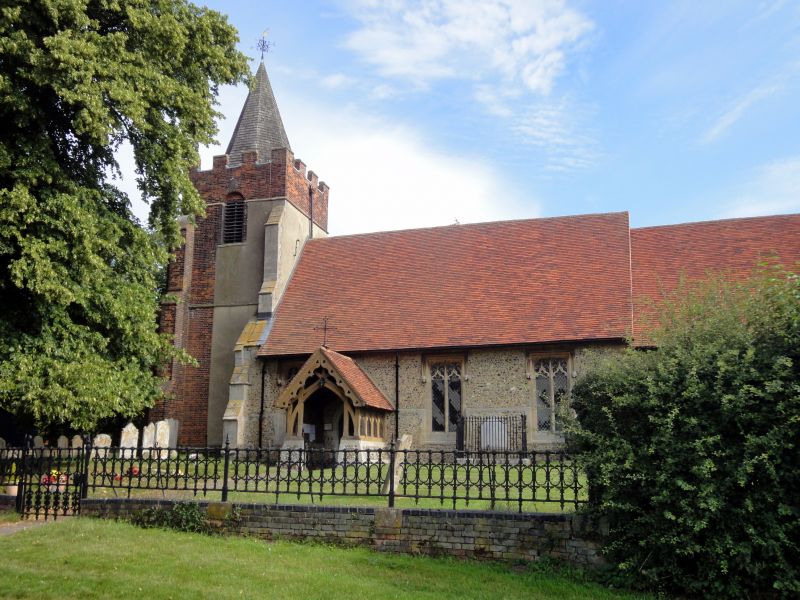 Parish church, late C12, altered in mid-C14. W tower mid-C14, repaired in late
C18. N vestry, S porch and general restoration, late C19. Flint rubble
intermixed with some Roman brick, with dressings of clunch, roofed with handmade
red clay tiles. The chancel has in the E wall 3 lancet windows, C19, except
the splays, and 2 more in the N wall. W of these is a blocked doorway, C13,
with chamfered jambs and 2-centred head. In the S wall there are 3 windows,
the first and third uniform with those of the N wall; the second is of 2 lights
under a square head, C19 except the moulded splays and rear-arch, C15. Between
the second and third windows there is a C19 doorway. There is a piscina with
trefoiled head and roll cusp points and 2 circular drains, C13. The chancel
arch is 4-centred, of 2 orders with moulded responds and arch, c.1340, and
moulded bases cut back for a screen, not present now. The nave has quoins of
Roman brick, and has been refaced in the C20. In the N wall are 2 windows,
the eastern is C19 except the splays and 4-centred reach-arch, plain chamfered
with broach stops, late C14; the western is a C19 lancet with round rear-arch,
late C12. Further W is the late C12 N doorway with chamfered W impost, semi-
circular head and square jambs, partly restored. In the S wall are 3 windows,
C19 except the splays, late C14. The eastern has a double ogee moulding, the
others are plain chamfered, the western with broach stops. Between the 2
westernmost is the S doorway, C13, with chamfered jambs and 2-centred head.
The door is battened with fillets and strap-hinges, C16. The W tower is of
3 stages, with a moulded plinth. The tower arch is 2-centred, with one wave-
moulded order and one double-chamfered order on the E side and 3 chamfered
orders on the W. The W window is of 2 trefoiled and ogee-headed lights with
an octfoil in a 2-centred head with internal and external labels, C14, partly
restored, and wrought iron grills, incomplete. Across the SW corner is a
blocked doorway with 2-centred head. There are blocked windows in the N, S
and W of the second stage, indistinct; that on the N has a label and 2-centred
head. The SW corner and the bell-chamber were extensively repaired in red brick
in 1789 (VCH, IV, 94). The roof of the chancel is of 7 cants, lathed and
plastered, with 2 tiebeams and wallplates moulded with a bowtell in great
casement, C14/15. The roof of the nave is also of 7 cants, lathed and
plastered, with wallplates moulded with an ogee and hollow chamfer with
converging stops, and 2 tiebeams plain-chamfered with step stops, C14/15. There
is a small sanctus bell inscribed XRE AUDI NOS, probably C14, and one other.
The font has an octagonal bowl with moulded underside, back face with
quatrefoiled panel enclosing a blank shield, panelled and traceried stem, mid
C14. In the floor of the chancel there is a brass of Myrabyll, wife of Edward
Sulyard, with figures of man in armour, woman in pedimental headdress, close
bodice and full skirt, inscription below, and figures of 4 sons and a daughter,
c.1495. There are wall monuments (1) to Damaris, widow of Ralph Cudworth, 1695,
white marble tablet (2) to Rev. Samuel Lowe, 1709 and Ann (Andrew) his wife,
1693, white marble tablet surmounted by a damaged broken pediment containing
a cartouche of arms (3) to Rev. Richard Cudworth, 1803 and his sons Richard
Charles, 1795, and Thomas 1797, white marble with urn and shield of arms, and
(4) tablet to Peter La-Chesney Heude, 1807. There are floor slabs to Sir
Francis Masham, bart., 1722 and the Honourable Mrs. Elizabeth Masham, 1724,
both in black marble. Outside, against the S wall of the nave, is the tomb-
chest of John Locke, philosopher, 1704, brick with stone slab and cast iron
railings. -