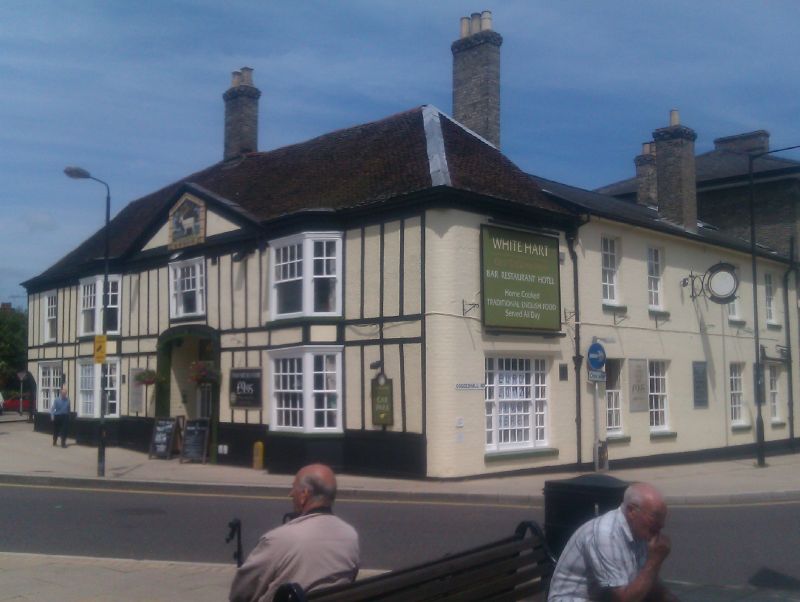 2.
A C17 timber-framed and plastered building, probably built on an L-shaped plan
but with many C18 and later alterations and additions. The original part is
the block at the north end with a west front effectively closing the vista along
Rayne Street. An C18 gault brick wing, now painted, extends east with a front
to Coggeshall Road and a farther late C18 or early C19 white gault brick wing
extends at the east end. 2 storeys and cellars. The west front now has sham
timber-framing on the exterior. 4 window range, double-hung sashes with glazing
bars, in flush cased frames with moulded architraves. (The 1st storey windows
have glazing bars in the upper sashes only.) The window ranges on either side
of a central entrance way are 3-light bays rising through 2 storeys. The centre
part, between the bays rises to a modillioned pediment with a late C19 or early
C20 tiled inn sign. Originally an elliptical headed carriageway opened into
a courtyard at the rear, now it has a recessed C20 doorway within the archway.
The C18 wing on the south side has 4 window range, double-hung sashes with glazing
bars in plain reveals. The wing at the east end has 5 window range, with a
higher storey heights (this contains the dining room), double-hung sashes with
glazing bars, the 1st storey windows have stucco architraves, alternate windows
(3) have cornices on console brackets. The ground storey windows have semi-circular
heads and plain reveals. A stucco band runs between the storeys and there is
a brick plinth. Roofs slate. The interior of the main block has exposed timber-
framing and ceiling beams. RCHM(56).