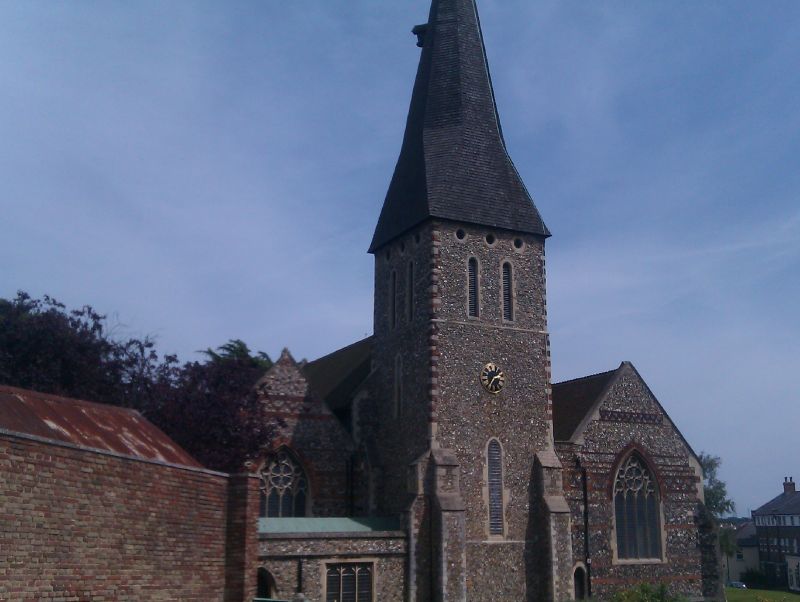 EXTERIOR:
The exterior, especially of the nave, is largely a creation of the C19 restorations and rebuilding, and almost all of the windows are replacements in a free Geometric style of what were originally C16 windows. Those at the W ends of the aisles, which have four trefoils forming a cross in a circle, are particularly interesting. The N and S aisles have pitched roofs that almost hide the small, C19 clerestory, replacing a medieval arrangement of low pitched roofs with embattled parapets and a much more prominent clerestory. Both aisles have brick dressings and decorative banding around the windows and at their W ends. The S porch has a pitched roof and replaces a boxier C16 porch, and the N porch is also C19. The S aisle ends flush with the W face to the tower; the N aisle is shorter, but has a single story vestry that also brings it level with the tower.

The 3-stage W tower retains its C13 appearance, although it was restored in the C19 and the presence of C17 brick in the upper quoins also testifies to earlier restoration or rebuilding. It has a tall, shingled broach spire. There is a single lancet in the tower W face, single N and S lancets in the stage above, and pairs of lancets topped by a row of small, round windows below the spire.

INTERIOR
The interior retains much more medieval fabric than the outside. The 3-bay N and S nave arcades are C13, and have chamfered orders on octagonal and round piers. The tower arch is also C13 and of similar design to the arcades.
The chancel arch was rebuilt in the C19 in an Early English style with the inner order on short, corbelled shafts, and the outer on nook shafts, but the chancel itself has many medieval features. There is a heavily reworked C14 door from the chancel into the N vestry. The arch from the chancel into the N chapel is late C14 or C15, and has two chamfered orders on polygonal moulded corbels. The 2-bay arcade into the S chapel is C16 and has moulded, 4-centred arches on a quatrefoil pier. The 2-bay arcade between the two parts of the N chapel is C19.

The roofs of the N and S chapels and the NE vestry are particularly notable. That in the vestry has a moulded, probably C15 wall plate. The southern part of the N chapel roof is C16 and has a carved boss of St Michael and the Dragon, now largely hidden by the organ. The northern part of the chapel has a C19 roof. The S chapel roof has heavily moulded and carved principal timbers and rafters, and seven carved bosses including the initials MR, an IHS monogram and the arms of the Grocers' company. The nave and aisles have steeply pitched C19 roofs, with arched braces.

PRINCIPAL FIXTURES
The church was entirely refurnished in the C19. The mid C19 font in an Early English style with a quatrefoil bowl decorated with bands of carved foliage standing on clusters of shafts is notable. Piscina of c.1530 in S chapel with a depressed, rounded head and a matching recess in the E wall that includes a drain at its N end. Some good C19 and C20 glass. There are a number of windows by Clayton and Bell, including the E window of c.1869, three windows in the S chapel of 1886 and 1921, and the E window of the N chapel, c.1889. Also in the S chapel, angel musicians by Hardman, c.1880.

Monument to John Hawkins, d. 1633 and his sons John and Abraham, d. 1644, by Francis Grigs. Of marble, it has Doric pilasters carrying a rich entablature. Brass to Samuel Collins d. 1670, 'Principal Physician to ye great Czar or Emperor of Russia'.

HISTORY
Braintree the place is mentioned in the Domesday book of the late C11, but the church itself is not listed, although this does not necessarily mean that there was not a church there at that time. The double square plan of the nave and the use of Roman brick in the chancel, however, suggests that the present church was built in the C12. Braintree was an ancient, and prosperous, market town, and the church was enlarged in the C13 and C14. Nave and chancel C12 in origin. The N and S aisles and the W tower were added c.1240. The NE vestry was added in the late C14, and the N chapel built between it and the N aisle c.1400. The S aisle was widened and lengthened to the W in the C15, and the S chapel was built c.1530, at which time the N aisle was widened and an upper floor inserted in the NE vestry. The clerestory was also added or refenestrated in the C16, and most of the rest of the church was given new windows. The extensive rebuilding of the church in the early C16 testifies to the particular prosperity brought to the town by the cloth trade in that period.

The church fell into disrepair in the early C19 as a result of a well publicised conflict over the payment of church rates; taxes which were used to support the church fabric. Between 1834 and 1853, a large number of local non-Conformists in Braintree refused to pay the rates, on the grounds that they did not use the parish church. This was part of a larger national dispute about church rates, which were finally abolished in 1868. The church was heavily restored in the mid C19, beginning with the restoration of the tower and spire and the rebuilding of the N aisle by J L Pearson in 1859-60. The S aisle was restored in 1866-7 by Frederic Chancellor, who also built the N porch and replaced much of the C16 work, including the S porch, clerestory and almost all of the windows. The N chapel was widened in 1886 by Ernest Geldart to form an organ chamber, and a choir vestry was added at the W end of the N aisle in 1894.

A notable feature of the restoration of St Michael's is the extent to which the church was rebuilt and older material replaced with something wholly new. The ruthless removal of features not deemed to be of the correct medieval period (in this case the removal of so much C16 Tudor fabric and its replacement with C13 work) was typical of church restoration in the mid C19. Later restorers were more sympathetic to all periods of a building's history.

REASONS FOR DESIGNATION
The church of St Michael, Braintree, Essex is designated at Grade II* for the following principal reasons:
* Fine medieval town church of the C12-C16, heavily restored externally in the C19, but retaining much medieval fabric internally.
* Restored by the very well known and well respected architects J L Pearson (1817-97) and Frederic Chancellor (1825-1918) and externally largely by them.
* Notable broached and shingled spire.
* Very interesting early C16 roof to N chapel