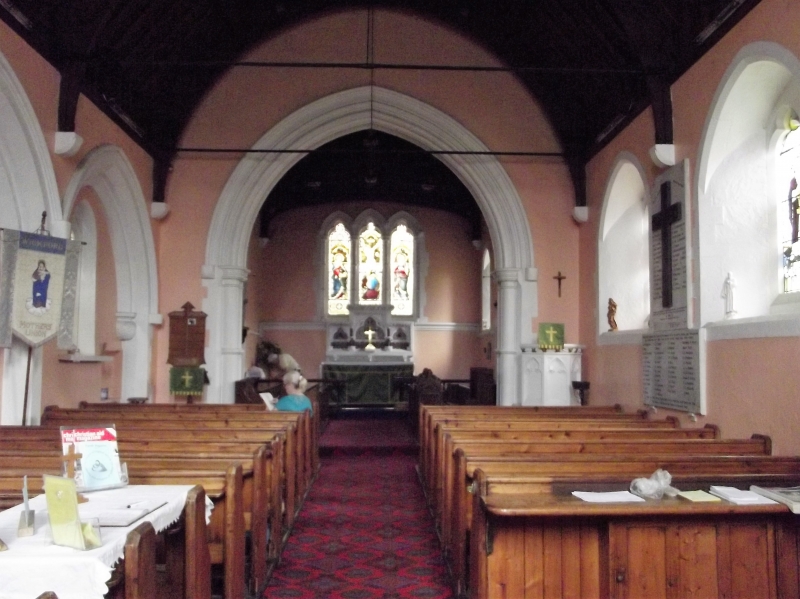 EXTERIOR: The show front is the S side which is a picturesque composition of nave, lower chancel, timber porch, and an unusually detailed bellcote. The chancel has diagonal buttresses and two trefoil-headed one-light windows and a moulded doorway. The nave has two pairs of two-light lancets E of the porch and a single lancet W of it. The porch, with cusped and pierced barge-boarding, stands on low stone side walls. At the W end of the nave the square bellcote straddles the roof and has open timber sides and a tier of quatrefoils under the splay-foot spire. On the N side of the nave the arches of the unbuilt arcade are visible, each arch enclosing a single lancet window. The NE vestry block has a pair of transverse gables forming an M-shape: a C15 window is used in the N wall. There is a c.1930s brick extension to the vestry on its E side. The E window of the chancel has three trefoiled-headed lights under a superordinate arch.

INTERIOR: The interior is plastered and painted including surfaces such as arches which were intended to have bare stone. Between the nave and chancel is a broad chancel arch with responds of paired demi-shafts with ring mouldings and moulded capitals. In the chancel the roof is reused work of c.1500 from the earlier church: it has two tiers of purlins and a ridge purlin and bosses at the intersections of the main timbers which are moulded. At the W end of the nave there is a large plain round-headed arch to support the bellcote. Set in the N wall of the nave is a three-bay arcade of double chamfered arches on octagonal piers with moulded capitals, intended as the arcade to the unbuilt N aisle. Over the roof there is a roof of arch-braced and king-post construction with braces from the king-post to an upper collar.

PRINCIPAL FIXTURES: The reredos is said to have come from the church of All Saints, Margaret Street, London, one of the key buildings of the Victorian Gothic Revival and the work of the important architect William Butterfield. Most regrettably the stone frame has been painted over. It is decorated with stiff-leaf foliage and rises in the centre in a crested cornice. Three trefoil-headed panels within the frame contain inlaid stone panels each with blind trefoil-headed arches and a carved cornice. The font is probably C15 with an octagonal stone bowl on a flared octagonal base. The nave benches have shaped ends and, rather unusually, open backs. At the E end the window glass is by A L Moore and Son and commemorates a death in 1919. A nave N window is by Jones and Willis, 1936. The nave S window with masonic emblems is by Arthur S Walker of G Maile and Son, 1947.

HISTORY: The old church was rebuilt in an Early English style in 1875-6 under the London architect Henry Stone (fl 1838-86). Old materials seem to have been reused including the chancel roof of c.1500. A reredos by William Butterfield from All Saints, Margaret Street, London, has also been reused although sadly abused by the application of paint.

REASONS FOR DESIGNATION:
The church of St Catherine, Wickford, is designated at Grade II for the following principal reasons:
* It is a picturesque example of mid-Victorian church-building.
* It reuses important earlier material in terms of the late medieval chancel roof and a Butterfield reredos.