Church of St Michael and the Holy Angels 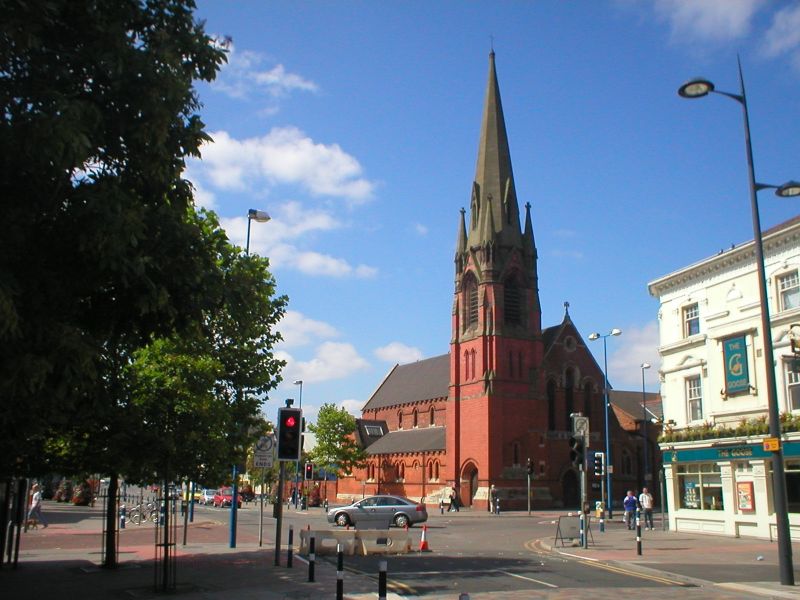 Entry Name: Church of St Michael and the Holy Angels

Roman Catholic Church. 1875 - 7 by Dunn and Hansom, with tower and spire
added 1911 by Edmund Kirby. Red brick with some stone dressings and tile
roof. The chancel is at the south-west end, but for purposes of description
the orientation is assumed to be conventional. Comprises a north-west tower,
a nave with clerestory and continuous chancel, north and south aisles, and
north and south chapels. The west wall has triple stepped lancets with stone
heads and sills, and a moulded pointed doorway with angle shafts. The tower
has clasping buttresses to the lower stage, angle buttresses above, and corner
pinnacles. The spire is of stone. The bell openings are each of two trefoiled
lights with a quatrefoil under a pointed head. The north doorway is moulded
and pointed. The aisles are of five bays, with alternate paired lancets and
round windows. The clerestory has single lancets. The transeptal chapels
each have two lancets with a round window above. At the east end is a rose
window. Interior: three-bay nave arcades with pointed moulded brick arches
springing from painted round columns with moulded capitals. The roof has
scissor-braced rafters. West organ gallery. The chancel is divided from the
nave by an arch-braced truss carried on slim engaged shafts. The chancel roof
is boarded. East window contains glass of late C19 date. (VCH, p 61).