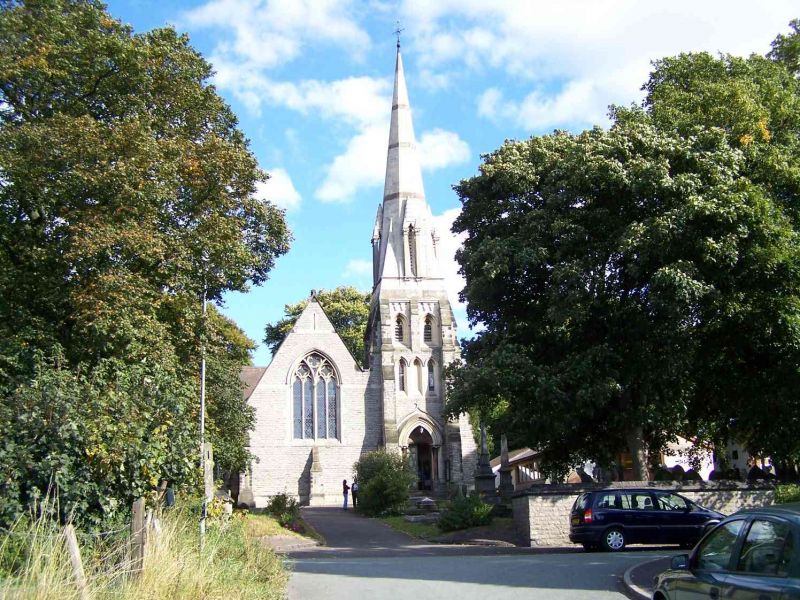 GV II
Church. 1856, on older site, by James Cranston. Lengthened, and south-west
tower with spire added, 1867-8. Limestone, with rubble walls and steep tile
roofs. Comprises a nave, north and south transepts, lower chancel, and north
vestry. The tower has angle buttresses, and a central buttress above the
lowest stage, which is set forward. To each side of this buttress there is
a one-light opening to both,upper stages. The broach spire has red sandstone
bands, and lucarnes with detached square shafts. The west door is moulded
with pointed arch and angle shafts. The west window of the nave has Geometrical
tracery and is of four lights. The nave windows are of paired trefoiled lights.
On the south side the nave if of three bays separated by buttresses. On the
north it is of four bays, with a further one-light window to the east. In the
angle with the transept is a stair turret. The north wall of the transept has
three trefoiled lights. Above them is a 2-light window with Geometrical tracery.
The lower part of the south transept is now covered by a gabled porch and late
C20 extension. The chancel east window is of three trefoiled lights with
Geometrical tracery. Interior: nave roof trusses have curved braces rising
to collars. At the crossing two trusses intersect diagonally to form a
skeleton vault. The chancel arch is narrower than the nave: it is pointed
and moulded in two orders. A fresco, painted in 1905, covers the east wall
of the transept. Windows contain some late C19 and early C20 glass.