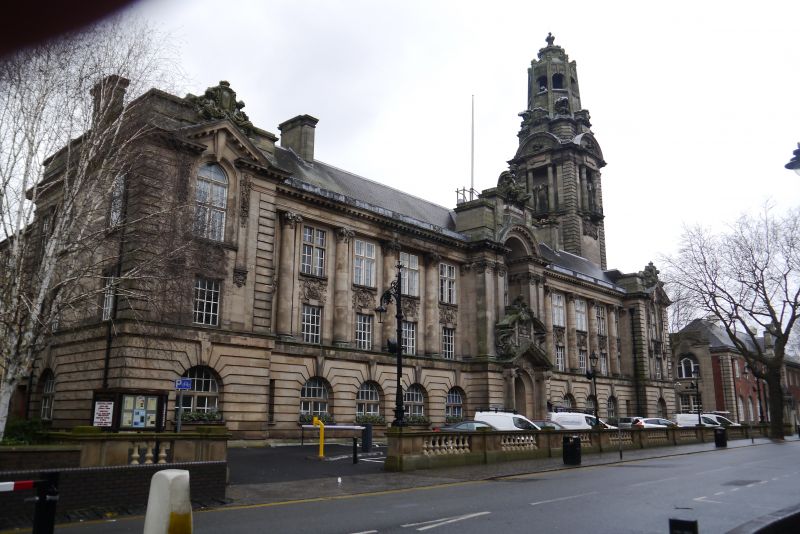 WALSALL MB LICHFIELD STREET (west side)
SP 0198 NW
13/66 Council House
GV
II
Town hall. 1902-5 by JS Gibson. Sandstone ashlar with tile roof.
Baroque style. Facade symmetrical, with outer bays projecting and with
five recessed bays on each side of centrepiece. Three storeys. Windows
have metal casements with glazing bars. Ground floor of channelled rustica-
tion, with round-headed windows which have projecting keystones. The
recessed bays of the upper storeys are divided by giant engaged Composite
columns. The second floor windows each have a mullion and transom. Below
each is a carved figure. Both outer bays have a second floor window with
round head and keystone which breaks into an open pediment surmounted by
carved figures. The central doorway has a round head within carved stone
open pediment and Ionic columns with reversed volutes. Above is a seated
female figure of Justice, breaking through a segmental pediment which is
supported by caryatids. Set back to the right is a tower with quoin strips
at the corners. On each side is an opening with balcony, below a segmental
pediment. Each has two Tuscan columns and has a smaller central archway
with pediment and round head, which appears to be freestanding. The upper
stage is a stone lantern with round-headed openings and corner figures.
Adjoins Town Hall (qv), listed under Leicester Street.