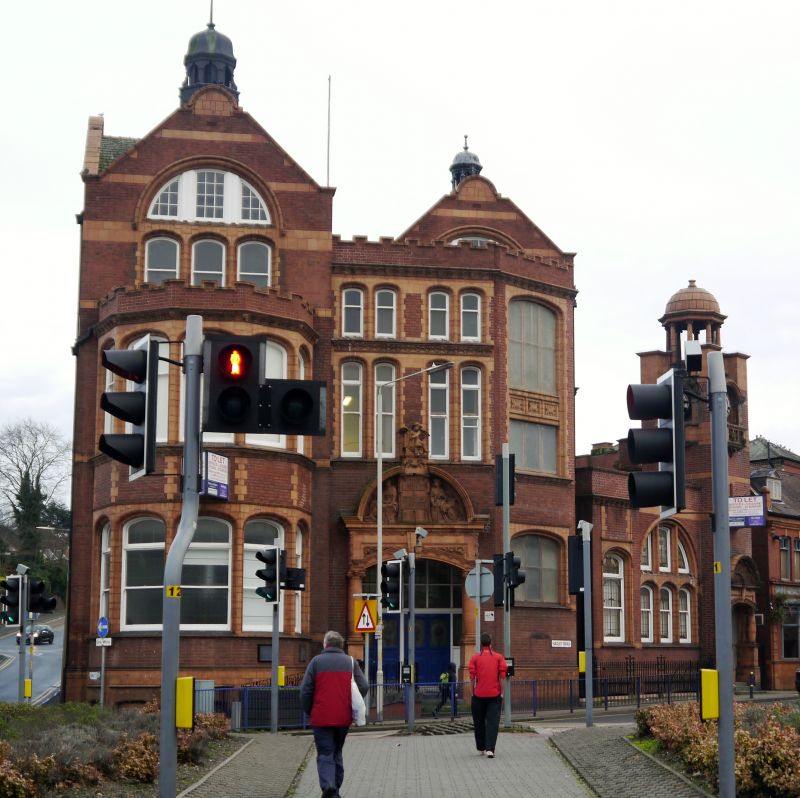 HAGLEY ROAD
1.
5106
SO 9084 1/103 Stourbridge College
of Art
GV
II
2.
College of Art, formerly town library and technical college. 1903-4 and 1908-9 by
Frederick Woodward. Red brick with terracotta dressings and Cumberland and Welsh slate
roofs with various brick stacks. In Netherlandish Renaissance style. Complex plan
with various ranges occupying corner site. Mostly of 3 storeys, basement and attic.
Entrance to corner on right has elaborate terracotta archway surmounted by relief figures
within a tympanum. Steps lead to part-glazed doors filled with elaborate stained glass
including portrait roundels of Kelvin, Shakespeare, Rubens and Mozart. Tall basket-
arched windows over, with moulded terracotta frames and ornamental cornice hoods.
Coped Dutch gable. To right a canted battlemented section containing the staircase
with similar elaborately ornamented window frames. Further to right, facing Hagley
Road, a 2-storey range in similar style. On right an elaborate terracotta archway
leading to door, and a clock tower over with clock faces within balconied arches and a
domed open belvedere on top. Behind this section rises the second span of the range facing
Church Street. Wide sash windows, some with terracotta decoration. On the roof ridge
an elaborate domed lantern. To left of the front entrance the end of the range facing
Church Street which has a large polygonal 2-storey bay with battlemented parapet and
large arched window over. To left the front facing Church Street which is a 9-window
range with 4 slightly projecting gabled sections and similar fenestration with elaborate
terracotta window surrounds. Further doorway in 2nd gable from left. 2 elaborate
domed lanterns on roof. Interior: glazed doors and partitions, staircase with
decorative cast-iron balustrade and a fine and extensive series of stained glass windows
in art-nouveau style, one signed S Evans, Stained Glass Works, West Smethwick. These
are most elaborate on the stairs but continue on both the Hagley Road and Church Street
fronts and are a very important feature of the building. Andrew Carnegie contributed
£3,000 to the library's foundation and a further £700 to the 1908 newsroom extension.