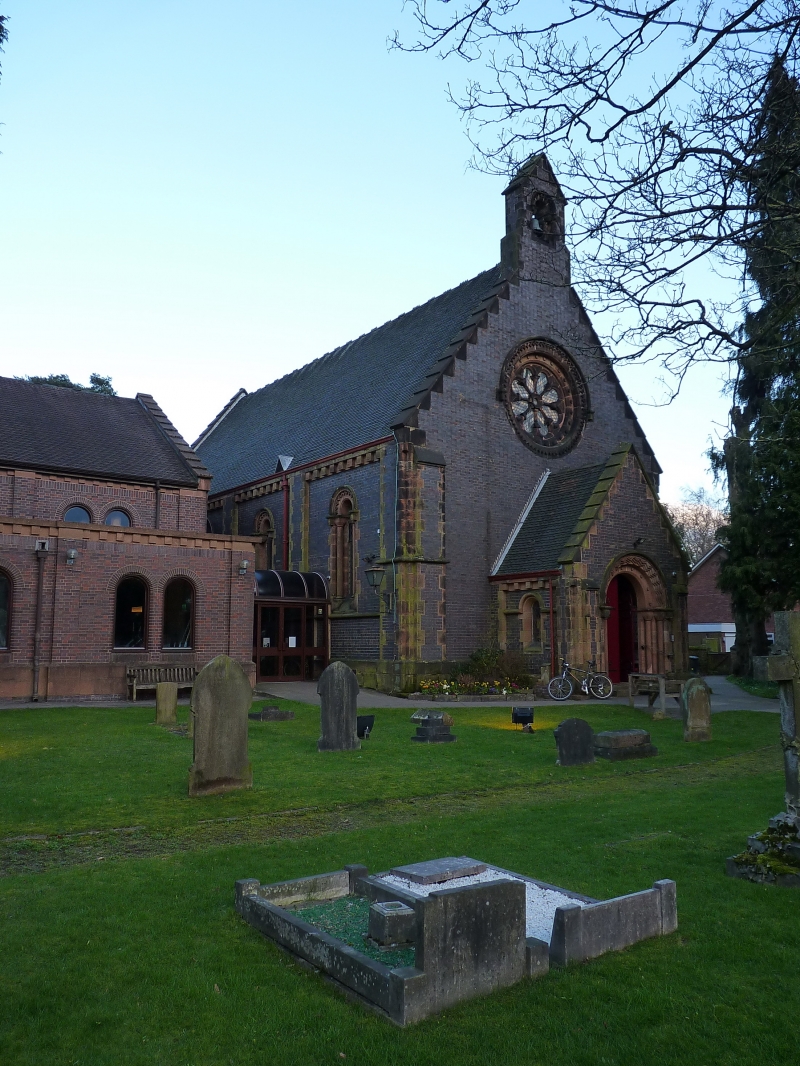 II
Designed by Henry J. Whitling, completed by Daniel R. Hill, 1843-5. Organ chamber by Charles E. Bateman, 1912-13. New nave to the north, with extensive reordering of the old church, 1985-7. It is the old church which is of special interest.

EXTERIOR: The most noticeable feature is the walling, of vitrified or 'engineering' brick probably made in Staffordshire. These enjoyed a brief local fashion among church-builders in the 1840s (e.g. the Presbyterian church, Broad Street, Birmingham, by J.R. Botham, 1848-9). The west front is a simple gabled composition with enclosed porch, a large wheel window above, and a bellcote on the gable. The red sandstone dressings have decent Neo-Norman decoration; two orders of columns flanking the west door, with the usual chevrons and billet mouldings round the arch. There are flat buttresses at the outer angles, and flat pilasters between four single-light windows on the sides. These have single columns, cushion capitals and decorated arches. The east end has a triple window with a small rose in the gable, and there is a large round-arched door leading into the gabled transeptal projection at the south-east now housing a staircase. This structure was originally a single-storey vestry, heightened and converted to an organ loft in 1912-13 by C.E. Bateman. On the north side of the nave is the new church of 1985-7. Of purple brick with paired round-arched openings, red sandstone dressings, and details such as clasping buttresses and the blocked eaves cornice successfully designed in keeping with the Victorian buildings. Old and new buildings are linked by a narrow and unobtrusive lobby of brown powder-coated steel with bronzed glazing.

INTERIOR: The nave was completely transformed in 1985-7 by the insertion of a mezzanine floor, lobby, staircase, office, kitchen, etc. To avoid the mezzanine floor colliding with the chancel arch, the ceiling was cut away in a semicircle and the novel device of a glazed half-dome inserted around the chancel arch to enclose the upper room. This at least allows the chancel arch to be seen: it is stepped in profile, with two orders of columns with scallop capitals, moulded imposts, and on the arch, raised bosses on the inner arch, then an order of chevrons, then an outer double band of alternating billets. The triple east window has similar decoration. At the mezzanine level, the roof trusses are dominant: heavy chamfered timbers of hammerbeam construction, with iron strapping securing the joints. The new nave of 1985-7 has brick and rendered walls, with timber cladding in the sanctuary and the roofs.

PRINCIPAL FIXTURES: Most fittings were removed in 1985. The major survival is the stained glass, of which much the most interesting is the triple east window, with brightly coloured and densely patterned glass by William Holland of Warwick, dated 1857. Similar glass in the rose window above. The long side windows of the nave have later C19 glass, seemingly unsigned, and none fully visible because of the inserted mezzanine floor. In the chancel are a few minor Gothic and Classical memorials, c. 1840s to 1860s.

HISTORY: In 1843, Miss Lucy Riland, a relative of the rector of Sutton Coldfield, offered £1,000 towards the building of a church in Walmley. Additional funds were given by Joseph Webster, owner of Penns Mill wire factory. The first architect was Henry John Whitling of Shrewsbury, previously of London, who flourished c. 1835-44. His plans may have proved unacceptable to the building committee. Whitling 'got into pecuniary difficulties' and left England in 1844. The plans were revised and executed by Daniel R. Hill (best known for designing public works in Birmingham including asylums, workhouse, baths, and Winson Green prison.) St John was opened by the Bishop of Worcester on September 2, 1845. Neo-Norman, the style chosen, enjoyed a brief fashion c. 1840-5. The cost was £2,658, of which the Incorporated Church Building Society (ICBS) contributed £200. Hill's alterations probably included a small single-storey vestry at the south-east. This was converted to an organ chamber (1912-13), by the Birmingham architect Charles E. Bateman. At the same time new choir and clergy vestries were formed by panelled partitions at the west end of the nave. In 1985-7 more radical changes were made at a cost of c. £400,000, with a new nave linked at right angles to the north, and the old church transformed into halls, offices, kitchen and meeting rooms, etc. The church re-opened on December 6, 1987.