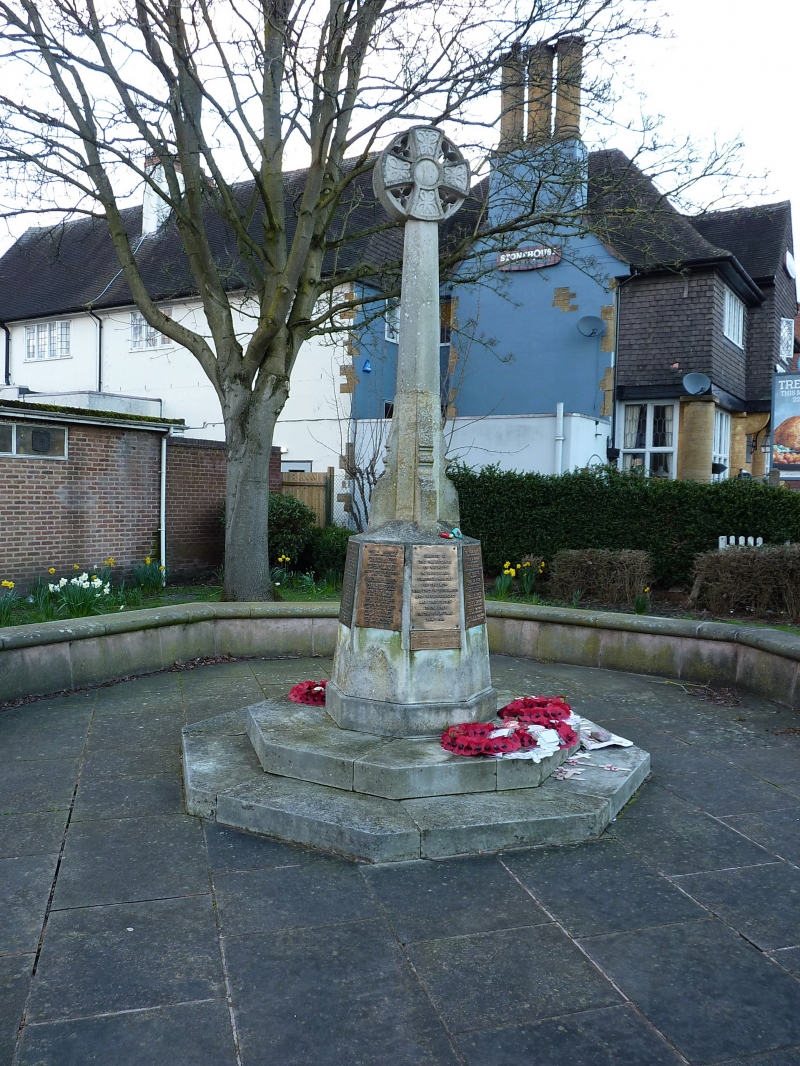 MATERIALS and PLAN: Portland stone with bronze plaques. The memorial takes the form of a cross with Celtic wheel head and octagonal shaft, base, plinth and platform. It is surrounded by paving with a low enclosing stone wall whose generous coping forms a bench.

DETAILS: the south-western face of the monument has a wheel head cross with Celtic knot design in relief to the arms of the head and tracery with trefoils set between the arms. Below this is a tapering octagonal shaft which has miniature buttresses to four sides of its deep base, each buttress having an elaborately moulded profile. The top of the plinth has a flared surface and below this the tapered sides bear bronze plaques with lettering in relief. The central side reads ‘ERECTED BY / THE INHABITANTS / OF WALMLEY / IN PROUD AND / GRATEFUL MEMORY / OF THE MEN / WHO LIVED IN THIS PARISH / AND NEIGHBOURHOOD / AND LAID DOWN / THEIR LIVES / IN THE GREAT WAR / 1914 – 1918’. Names and service details of the fallen are shown on the tablets on the flanking sides. Below the central tablet is a plaque bearing the name of one soldier who died in the Bosnia campaign in 1996. The northeast face has similar carving to the cross head.

The surrounding wall, which also forms a fixed bench, runs to the north-east, north, north west, east and south-east sides of the monument, but is splayed to open out to the pavement at the south-west corner. It is formed of low blocks of ashlar and the broad coping has deep roll mouldings to each side.

The memorial was unveiled by Lt-Gen Sir Harold G Walker KCB and dedicated by the Bishop of Birmingham in a ceremony held on 13 November 1920. The monument was moved c. 2003 to its present site c. 100m to the south of its original position. The low wall which surrounds it was also moved and its configuration was adapted to the corner site.

Walmley War Memorial, is listed at Grade II for the following principal reasons:
* Historic interest: as an eloquent witness to the tragic impacts of world events on this community, and the sacrifices it made in the conflicts of the C20;
* Architectural interest: as an accomplished and well-realised war memorial, which takes the form of a Celtic cross;
* Group value: the cross now forms a group with the church of St John Evangelist, Walmley (Grade II).