Church of St Agnes Including Boundary Walls and Lych Gate 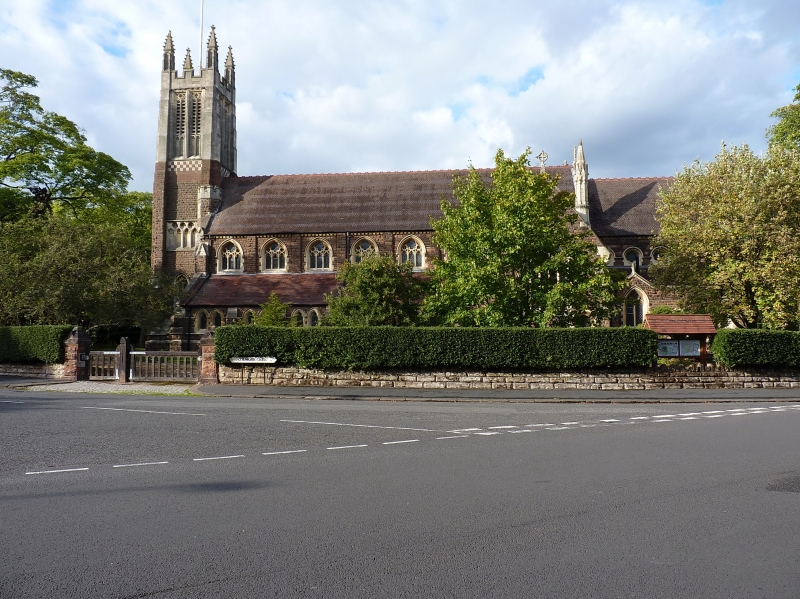 PLAN: The church is orientated east to west and the plan consists of a nave, north and south aisle, chancel, north and south transept, south vestry, north organ chamber, north porch, west porch and west tower.
EXTERIOR: The west end consists of a central tower of two stages: a rusticated sandstone base by Davis and a Bath stone upper stage by Bateman. The upper stage has a battlemented parapet and crocketed pinnacles to the four corners. To each face of the upper stage is a pair of rectangular louvered windows with blind tracery. The lower stage has three rows of alternating red and white tiles and blind tracery to the south and north side. To the west face of the tower is a tracery window with three cusped lancets with central sexfoil and quatrefoil to either side. The doorway is a recessed pointed brick arch of two orders supported on round piers with foliate capitals. The porch has a triangular gable end with cinquefoil to the centre and hood mould to the pointed arch doorway with head stops. To either side of the gable are stone tiles with a flower motif. Pilasters to either side of the doorway have triangular capitals with pointed trefoil motif. To either side of the tower are the single storey aisles. The north and south aisles are six bays with dividing shallow buttress between pairs of cusped window within pointed stone arch openings with hood mould and central foliate stop. To the nave are six clerestorey windows consisting of three cusped lights with sexfoil above and quatrefoil either side. To the eastern end are the transepts with a tracery window of five cusped lights with three sexfoils above. To the angle between the west tower and the south elevation is an octagonal rusticated stone turret with battlemented parapet. To the east end of the south elevation is the extended vestry, to the north elevation is the organ chamber. To the west end of the north elevation is the gabled porch with central trefoil and recessed pointed arch doorway. To the outer corners are angle buttresses surmounted by a turret with plain pinnacle. The chancel's east window is divided into three: to the centre are three tall lancet windows with cusped heads with sexfoil above to the centre and quatrefoil either side set with a moulded pointed arch with engaged shafts; the outer windows have a single lancet window with cusped head and quatrefoil above within a moulded pointed arch with engaged shafts. To the four corners of the chancel are stone turrets with blind arcading and plain pinnacles.

INTERIOR: The interior has exposed Bath stone. The six bay arcades are formed from round stone piers supporting pointed arches with moulded impost, and hood mould with head stops. Cluster piers support the pointed chancel arch. The arch-braced scissor and collar rafter roof is supported on round moulded stone corbels with marble shaft and moulded stone pendant. The floor is wood block with tiles to the side and nave aisles. Contemporary fittings and fixtures include the stone font, which has been relocated, with the baptistery, to the south aisle, and has the inscription "PARVULI, PARVULIS RENASCITURIS RENAT" (The children who have been born again in Baptism to the children who will be born again); and the East window of "Christ in Glory worshipped by prophets and saints" designed by Ballantyne and Gardiner of Edinburgh to celebrate the Diamond Jubilee of Queen Victoria in 1897. Most of the oak joinery is mid-C20 and was designed by James Swan in a late Perpendicular Gothic style and carved by Robert Pancheri of The Bromsgrove Guild, and includes the richly carved pulpit, font cover, baptistery screens, lectern and chancel seating. Much of the stained glass is C20 and includes the windows to the south aisle by John Hardman Studio (1952); further windows to the south aisle, south transept (unfinished) and to the north aisle by Claude Price (1949-55); and the window to the west end of the north aisle by Harry Payne (1909) with the theme "Suffer the Little Children". The re-ordered chancel includes a stone reredos by Bolton & Son of Cheltenham with panelling to the chancel walls as a memorial to the First World War (1920). The reredos and panelling has marble to the niches with marble piers. To the three central niches are three statues: St Agnes, Christ and St George. To the two niches to either side are symbolic representations of the four gospel writers in stone relief roundels. The reredos and panelling also includes six angel statues. The oak altar has carved relief of the Agnus Dei (Lamb of God) to the centre with flanking angels. The organ to the west end is by William Hill & Son of London and is from the redundant St Mark's Church, Leicester.

SUBSIDIARY FEATURES: The sandstone churchyard wall is circa 1880s. The memorial lychgate was built in 1938.

HISTORY: In 1882, the Birmingham architect, William Davis, won an architectural competition for the design of St Agnes. The building contract was awarded to William Bloore and the church was named after Canon Colmore's wife, Agnes. The church was built in two stages: 1883-4 and 1892-3 with the tower completed in 1932. In December 1940, a bomb exploded in the south-west corner of the churchyard causing some damage including the destruction of the aisle windows which were largely replaced in the 1950s and the partial destruction of the banded tile roof.

REASONS FOR DESIGNATION
St Agnes' Church is designated at Grade II for the following principal reasons:
* The church has clear architectural quality and was designed by two architects of note, namely W. Davis and C. E. Bateman.
* The retention of the fixtures and fittings of Swan and Pancheri's internal decorative scheme which includes the chancel seating, font cover and lectern
* The retention of stained glass by some of the principal workshops of the period including John Hardman Studios