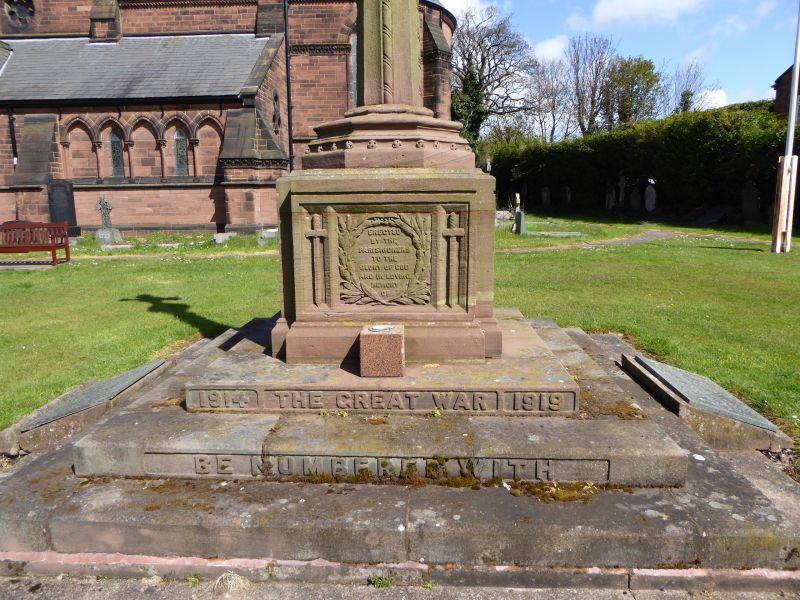 Entry Name: Standing cross to the east of the porch of the Church of St Barnabas

Standing cross, C9 or C10, restored in 1958 with some modern stonework.

Standing cross, C9 or C10, restored in 1958 with some modern stonework

DESCRIPTION: the cross is located approximately one metre east of the east wall of the south porch of the Church of St Barnabas on an area of lawned grass, and stands approximately 1.9m high overall. The cross fragments are assembled on a modern base of roughly dressed stone, which is set into the ground. The lowest part of the cross shaft is formed by a modern block of red sandstone that incorporates a bronze plaque to the south face commemorating the re-erection of the cross in 1958 by the Bromborough Society. The two upper parts of the cross shaft above are believed to be C9 or C10 in date and are of Anglo-Saxon design with a roll moulding running down the south west edge and interlace decoration on the west and south faces. The east face is roughly dressed for insertion onto another building and the north face is roughly dressed to take plaster on the surface of the stone. Above these pieces of stone is another modern insertion to support a C9/C10 fragment of a wheel head topped by a cap of modern stone to complete the design. The wheel head has a beaded moulding around the south face and is partly pierced for the arms of the cross within the wheel; these arms project slightly beyond the edge of the wheel. The central boss of the wheel head has been erased. The modern stones are left plain to contrast with the Anglo-Saxon stonework and to highlight the fact that they are modern additions.

A standing cross is a free standing upright structure, usually constructed of stone, mostly erected during the medieval period (mid-C10 to mid-C16). Standing crosses originally served a variety of functions. In churchyards they served as stations for outdoor processions, particularly in the observance of Palm Sunday. Elsewhere, standing crosses were used within settlements as places for preaching, public proclamation and penance, as well as defining rights of sanctuary. Standing crosses were also employed to mark boundaries between parishes, property or settlements, whilst a few crosses were erected to commemorate battles. Some crosses were linked to particular saints, whose support and protection their presence would have helped to invoke, and crosses in market places may have helped to validate transactions. After the Reformation, some crosses continued in use as foci for municipal or borough ceremonies, for example as places for official proclamations and announcements.

The standing cross in the churchyard of the Church of St Barnabas is believed to be Anglo-Saxon and originally date to the C9 or C10. The cross was re-assembled and re-erected in 1958 by the Bromborough Society from a number of fragments found in 1863 during the demolition of an earlier church on the site, with modern stonework added where fragments were missing. The C9/C10 fragments are believed to all be from the same original cross.

The remains of seven other stones from this period have also been previously recorded in the churchyard. These have been incorporated into stone walls and rockeries in the garden of the rectory or have been lost. The remains suggest that the site of the church was an important ecclesiastical site during the period immediately before the Norman Conquest.

The standing cross to the east of the porch of the Church of St Barnabas is listed at Grade II for the following principal reasons:

* although not all of the cross is original, a significant proportion of C9/C10 fabric survives and includes intricate carved mouldings and interlace decoration.

* the presence of the cross points to the site of the church having been an important ecclesiastical site in the late Anglo-Saxon period.

* with the Church of St Barnabas (1862-1864, built on the site of an earlier church, Grade II*) and the sundial in the churchyard (Grade II), which was possibly formed from a C15 cross.