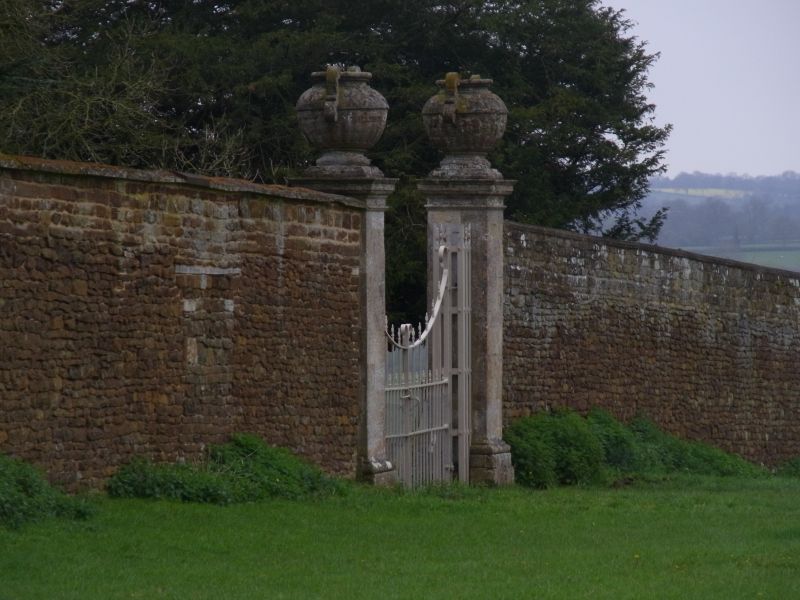 CANONS ASHBY
SP5750
19/34 Canons Ashby House, garden
18/01/68 walls running from SW corner
of House to Lion gates to S,
including gate and gatepiers
(Formerly listed as Walls to
court and garden and gatepiers
at Canons Ashby)
GV II
Garden wall, gate and gatepiers. Early C18. Coursed squared ironstone, some
limestone dressings. High stone coped wall forming S boundary to Green Court
with row of eared stone urns, and consoles where wall meets SW angle of Canons
Ashby House and at far end of Green Court where it meets the pier at this
corner. Pier has moulded plinth and cornice, plain sides and obelisk supported
by 4 stone scrolls. A C16 re-used doorway with 4-centred moulded arch head and
carved spandrels gives access from Green Court to garden. From pier at SW angle
of Green Court a low stone coped wall runs N to gates of Green Court with timber
posts at intervals which have pierced finials and support 2 wrought iron rails.
Another high stone coped wall runs S from Green court to gates and gatepiers to
park. Gatepiers have moulded plinths and cornices, plain sides and large eared
and gadrooned urns. C19 iron gates. From gates to park, a similar wall runs S to
a pier at SW angle of garden. Pier has stone armour (renewed) on square moulded
base with splayed feet. From this pier a low wall retaining the garden and
giving views of the park turns E then NE retaining SE corner of terrace and S
down to the Lion gates (q.v.) at the bottom of the orchard.
(National Trust Guide: 1981 pp.30-34; Canons Ashby gardens and park are included
in the HBMC Register of Gardens at Grade II*).