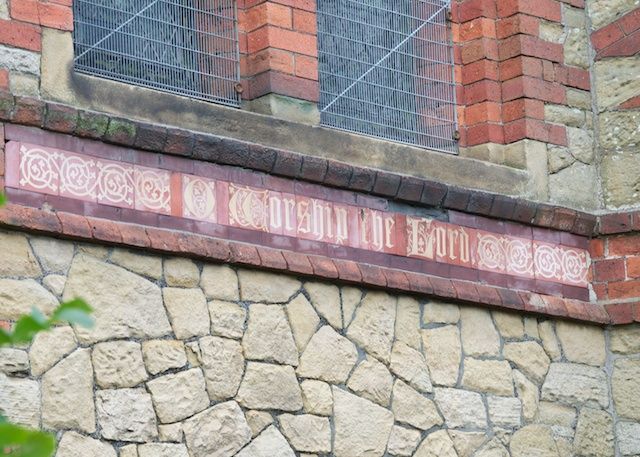 EXTERIOR: the church has a stone plinth, brick banding, and overhanging eaves. The stonework is laid in a crazy-paving manner. The use of yellow stone and red brick dressings and decoration give a general effect of 'constructional polychromy'. The nave and aisles are divided into four bays by buttresses to the aisles and pilasters to the clerestorey. Each bay has two windows; the clerestorey has quatrefoil windows, with lancet windows to the aisles. The south-west porch has a pyramidal slate roof, heavy diagonal buttresses, and a pointed-arched entrance arch flanked by two roundels containing relief carvings of the keys of St Peter and a shield and mitre. The timber double doors have decorative ironwork. To the west, side elevation is a semi-octagonal stair turret intended for access to the uncompleted tower. The organ chamber is roofed at right angles to the chancel and has a rose window in the gable surrounded by surface grid decoration in brick. The chancel has heavy diagonal buttresses, with coupled lancets to each face with traceried heads. Beneath the windows is a band of encaustic tiles bearing a religious inscription. The central, east face has surface decoration of a brick Celtic cross. The north vestry is built as a continuation of the north aisle. At the west end the square former baptistry has a steep pyramidal slate roof, with narrow, trefoil-headed lancet windows.

INTERIOR: the chamfered-arch nave arcades have circular, banded columns with semi-octagonal terminating pilasters, some with floral capitals and some with moulded capitals. There are relief-carved roundels in the spandrels. The chancel arch has an inner chamfered arch springing from imposts with knotted tails. The chancel has a decorative wrought iron screen, timber and decorative iron side screens, choir stalls, timber communion rail, and a carved-stone reredos. The chancel roof has scissor brace trusses, with alternating false hammerbeam trusses and collar-beam trusses to the nave. The floors have encaustic tiles with inscriptions at the altar rails, choir stalls, and chancel step. There is a carved stone pulpit, and a carved stone font with a timber lid which now stands in the south-west porch. The windows have stained glass by F Comere and J Capronnier dated variously from 1889 to 1908, some damaged, and by Walmsley dated 1914.

The boundary wall of the church, which also encompasses the modern former vicarage, is not of special interest.

St Peter's Church, Newbold, serves a church district brought into existence by the passing of the Rochdale Vicarage Act of 1866; the district contained a population of about 6,000, almost entirely consisting of factory workers. The church was built in 1868 -1871 by the Manchester architects' practice James Medland and Henry Taylor. The Taylors were responsible for a number of churches in the north-west, many of which are listed. They include a group of five in Rochdale: All Saints' Church, Foxholes Rd (1865), St Mary's Church, School and Vicarage, Oldham Road (1865), St Peter's Church, St Peter's Street (1869), the Church of St John the Evangelist, Market Street (1871), and St Edmund's Church, Clement Royds Street (1870-73).

The church is shown on the first edition Lancashire 1:2500 Ordnance Survey map published in 1893, together with a large vicarage on its north-east side, facing onto Church Road. The original vicarage has subsequently been demolished and a modern vicarage was built to the east of the church in the 1970s. The vicarage is now a private residence.

The Church of St Peter, Rochdale, of 1868-1871 by James Medland and Henry Taylor is listed at Grade II for the following principal reasons:
* Architectural Interest: an imaginative, eclectic Gothic design using a dramatic polychromy of quirky uncoursed polygonal stonework of bright yellow sandstone contrasting with red brick dressings and decoration
* Architect: designed by brothers James Medland and Henry Taylor, a successful Manchester architects' practice, whose churches display a maverick originality in their use of the Gothic idiom, attention to detail, and quality of craftsmanship, which has resulted in many being listed, with St Anne's, Denton, and St Edmund's, Rochdale, both listed at Grade I
* Decorative embellishment: good quality craftsmanship is displayed in features such as the stained glass windows by F Comere and J Capronnier, moulded and floral capitals to circular, banded arcade columns, relief-carved roundels in the spandrels, wrought-iron chancel screen, carved-stone reredos, pulpit, and font with a timber lid, and encaustic floor tiles with inscriptions