A Grade II Listed Building in Balderstone and Kirkholt, Rochdale 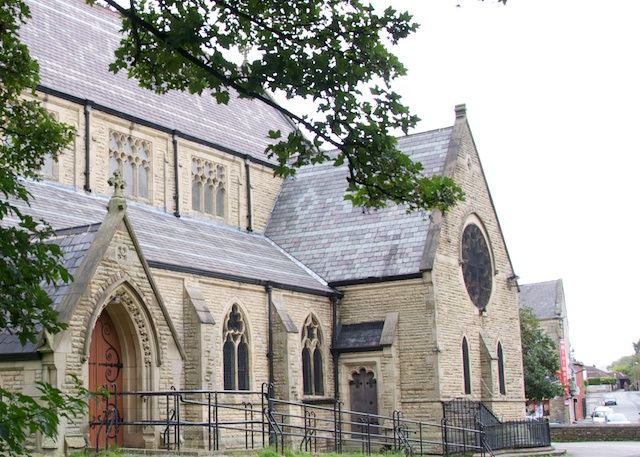 Church. 1865-72. J.M. and H. Taylor. Coursed rubble with
ashlar dressings and slate roof. Nave with aisles,
clerestory, transepts, chancel and north west tower. Gothic
Revival in a Decorated style. North elevation has 4-bay
nave with elaborately buttressed aisles. Window openings to
aisles are of two lights with Decorated tracery and hood
moulds. Square-headed openings to clerestory are 3-light
with cusped tracery. The transept has a rose window, and a
central circular buttress with a carved animal finial and
rises from a three stage hexagonal base. The chancel is of
two bays and has diagonal buttresses and moulded eaves
detail. Each part is roofed separately with patterned
slates and has gable parapets and cross finish. The lofty
tower with its diagonal offset buttresses is of 4 stages and
has an octagonal stair turret in its left side. The bell
stage has 2 cusped lancet openings, ball flower eaves detail
and angel and animal gargoyles. The broach spire has gabled
lucarnes and canopy pinnacles to each corner. Inside there
is a four-light stone screen between chancel and organ
chamber and vestry, polished granite nave arcade columns and
a central space with high transeptal and chancel arches.
The roofs are scissor trussed except for the chancel which
is braced and panelled. The church forms part of a complete
group with the school to the south, in the same style.