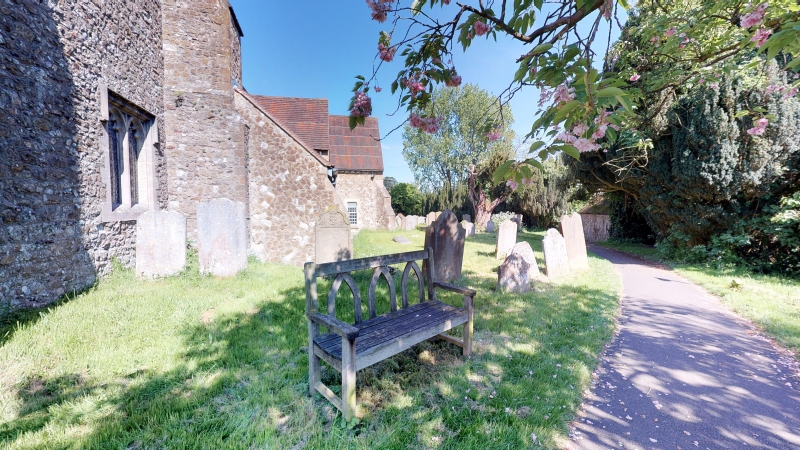 The earliest visible fabric is the C13 arcades, but these may have been added to an earlier church. The tower is probably late C13, and the N transept was added c.1320. The tower was remodelled in the late middle ages, and the whole church was heavenly restored and externally largely rebuilt by Alfred Waterhouse (1830-1905) in 1864-5 including the addition of the S chancel chapel and N vestry. Following a severe fire in 1989, the church was reroofed, partially rebuilt and reordered by Peake Short and partners.

Embattled 3-stage, tower, C14 remodelled and heightened in the later middle ages. Small late perpendicular windows with depressed heads in the upper stages. The lower stage has very heavy buttresses, added after the tower was built, including central buttresses on the N and W. That on the W incorporates a tunnel-vaulted W porch. Chamfered W door.

INTERIOR;
The introduction of the clerestory and the new roofs make the church very light internally. 3-bay N and S nave arcades of the early C13, with short, round piers and double chamfered arches, partially rebuilt, with a similar arch into the N transept. There are C13 engaged shafts on either side of the C15-style E window. The 2-bay chancel arcade has early C13-style piers by Waterhouse, now rebuilt, with a piscina set into the E respond. Nave roof of 1991-2, a faceted barrel vault of laminated timber trusses, boarded behind. The chancel roof follows the design of Waterhouse's roof, with arch braced trusses on short posts, divided into panels by ribs and beams.

The N chapel largely survived the fire and has many good monuments. The roof is divided into panels and has painted decoration. The tower was also undamaged in the fire. Tall C15 tower arch with dying chamfered orders, and above it a late C13 two light window, now internal.

The 1991-2 work included the conversion of the former S chapel/organ chamber into a parish room and the introduction of a kitchen and lavatories.

PRINCIPAL FIXTURES
Pulpit of 1623 from St Nicholas, Rochester, C19 pews and chancel woodwork by Waterhouse were destroyed in the fire of 1989. C19 font in an early C13 style with a round bowl on Purbeck marble shafts.

Some fragments of old glass reset in the S transept. N transept, mid C20 Magnificat by James Hogan and Carl Edwards. All other glass late C20 including S transept E window by John Hayward and E window by Lawrence Lee.

Very good monuments, including in the tower, an early grave slab with a cross; Dorothy Berisford, d. 1613, an almost plain tomb chest; and Margarita Seyliard, d. 1615, a simple wall tablet. In the N transept, Robert Heath, d. 1649 and wife, reclining alabaster figures, he is dressed as a judge, 1664 by Thomas Stanton. John Turton, d. 1806, George III's doctor, a Grecian tablet by Sir R Westmacott, also by Westmacott a tablet to Mary Turton, d.1810. A revivalist C17-style monument to H. Avray Tipping, d. 1933, author of English Homes; and a well-known writer and garden designer.

HISTORY
The church is in Domesday book, and an early graveslab with a cross was discovered under the tower. Before the Waterhouse restoration, there were C12 and early C13 windows in the chancel, and the arcades are C13. The N transept, known as the Stocket chapel, built c. 1320 was the private chapel of the lords of Brasted Place until the early C20, and contains many tombs to residents of that house. Pre-restoration images show a range of windows in the church, mostly late medieval, but including a C17 or C18 dormer in the nave, probably for a former gallery. The massive buttresses of the tower suggest ongoing structural problems, and the church was rebuilt externally by the celebrated architect Alfred Waterhouse in 1865. The church was damaged during WWII, when it lost most of its glass. Restoration was paid for by the War Damage Commission. It was very badly damaged in a fire of 1989, when both the C19 and 20 work was largely lost, and restored again in 1991-2.

REASONS FOR DESIGNATION
The church of St Martin, Brasted, is designated at Grade II* for the following principal reasons:
* Very good C13 core, surviving despite several restorations.
* Excellent exterior, including outstanding and innovative tracery, by Alfred Waterhouse, also largely surviving despite a fire and restoration.
* Notable monuments of the C17-C19