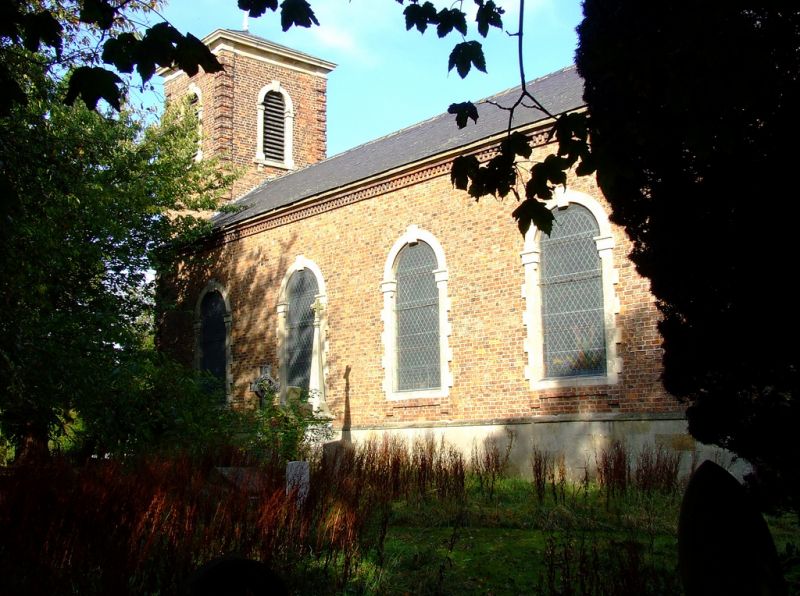 INTERIOR. Round-headed doorway from tower to
nave; nave open to chancel. Modillioned cornice, 8-bay ceiled roof with
exposed chamfered beams; inserted C19 posts and moulded brackets forming
chancel "arch". Original flagstone floor with black marble insets to nave,
C19 polychrome tiled floor to chancel. Oak chancel screen in Classical
style with Ionic pilasters and dentilled pediment; door to vestry with eared
architrave and entablature. Stained glass east window of 1897. Brass to
Sir William Ascough (d1541) and his wife: figures of Knight and Lady
approximately 0.45 metres high in costumes emblazoned with heraldic devices
inscribed scrolls issuing from mouths, inscribed plate below, and small
indent for missing brass above. Alabaster and ashlar chest tomb to Sir
Edward Ayscough (d1612) and wife Esther: effigy of Knight in armour lying on
rolled mat, with head on tasselled cushion, coat of arms at head and helmet
at feet, beside effigy of Lady lying on her side propped up on her elbow, on
chest with angle pilasters carved with trophies, inscribed black marble
frieze, and miniature figures of 5 male and 6 female children kneeling
alongside. Early C17 alabaster and marble wall monument to Sir Edward
Ayscough, erected by his son Sir Francis: inscribed tablet in pilastered
surround with strapwork supports, inscribed frieze and cornice, carrying a
bust with both arms, the head resting on one hand, the other holding a baton
(missing at time of resurvey), in a round-arched niche with rosette ornament
to soffit and relief panel to rear with trophies, beneath inscribed frieze
and moulded cornice supporting oval relief tablet with arms and crest.
Octagonal font with plain moulded bowl and base on square pedestal, reset in
1872. Natte's drawings show oculi to the tower. The plinth probably
incorporates ashlar from the previous church which collapsed in 1746.
Drawings by C Nattes, 1796, Banks Collection, Lincoln City Library;
N Pevsner and J Harris, The Buildings of England: Lincolnshire, 1978, p 377,
plate 44.