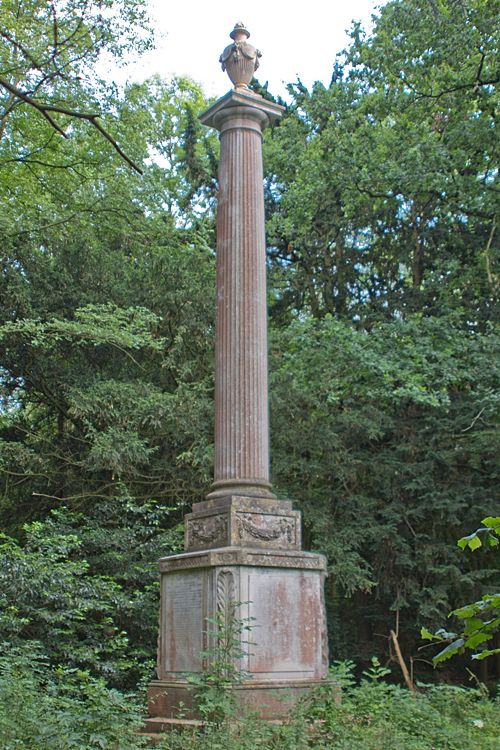 Monumental column. To Edward Baker d.21st April 1796, Henry Baker
d.9 June 1804, Charles Adolphus Baker, d.23 June 1822. Probably c.1804,
many later inscriptions in memory of Baker family. Portland stone. A
tall fluted Doric column with draped fluted urn on top, swags of oak
leaves in panelled sides of square block under the column base, on top
of tall square pedestal with elongated carved consoles set diagonal at
each angle, guilloche carved band to capping and moulded base raised on
3 high stone steps. Pedestal about 2M square, and monument about 10M
tall. Lengthy inscriptions on 4 faces of pedestal and later ones on
faces of steps. On S face of pedestal inscription to Edward Baker
1779-1796. On N face to Henry Baker. On W face to Charles Adolphus Baker
1792-1822. On E face a latin inscription to Edward, Henry, and Charles
Adolphus Baker. Stone moulded base stones for railings surround the
monument (railings said to be at Bayfordbury). Central on W at foot of
steps a 12 inch diameter stone ball set in a square base about 2ft
square. Stone drum at NW corner of steps with incomplete inscription
and date 1807. 3ft diameter spiked naval mine a little to NW.