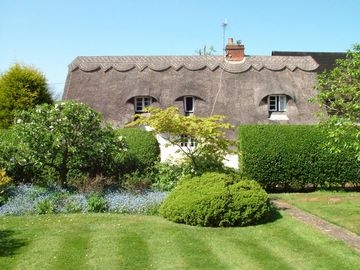 Almshouse now a house. Rebuilt on new site 1691 as part of
Page's Charity (Chuck (n.d.) 11). Small 1960s E extension
Timber frame roughcast with basketwork pargetting at ends, under
a steep thatched roof. A long one and a half storeys house
facing N with a rear outshut under a catslide roof. 4-cells with
central chimney and lobby entry between the two E rooms. Low
front eaves with 3 2-light flush casement windows and panelled
door opposite red brick central chimney. Dripboard across each
gable with 2-light window below and to attic above. Interior has
thin timbers with tension bracing, axial beams with exposed
joists, ogee stop to lintol of open fireplace with 2 recesses in
the backwall over arch, clasped-purlin roof structure on collar-
beam trusses, and axial joists of 2nd room removed to throw it
open to the roof. Formerly called Nottinghams.