The Castle About 3/4 Mile East of Hagley Hall 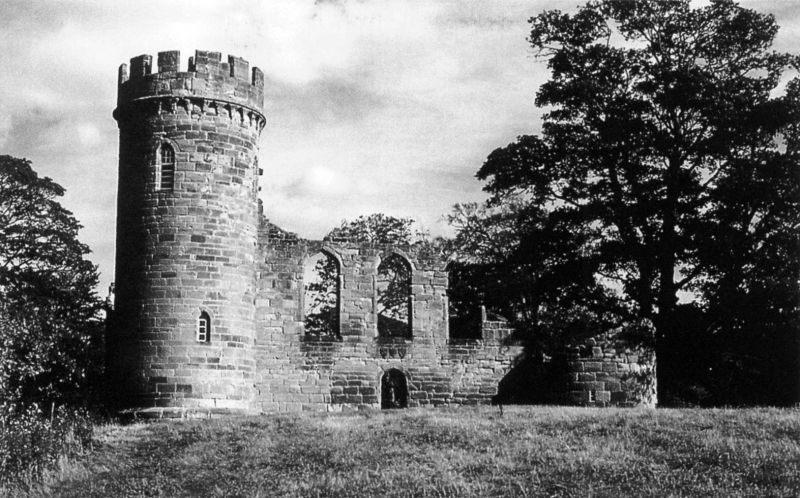 Entry Name: The Castle About 3/4 Mile East of Hagley Hall

Rectangular plan with four round corner towers; only the northwest tower is complete and is of four storeys; the other towers are of one or two storeys and left in a deliberately ruinous state. Gothick style. The northwest tower has small rectangular and lancet (some are cusped) windows on the lower floors; the fourth floor has large pointed windows. Adjoining to the southeast is an intersecting taller stair turret; both tower and turret have corbelled and embattled parapets. The other towers have small rectangular and square openings. The linking walls are deliberately ruinous but the west wall is almost complete and has three tall pointed windows; beneath the central window is a pointed doorway and above the doorway are three shield reliefs.

Interior: the principal room on the fourth floor of the northwest tower has a domed ceiling with Gothick plaster decoration, cusped pointed niches alternating with the windows and above the door is a quatrefoil containing a coat of arms. Within the courtyard, adjacent to the northwest tower is a C19 building with a shallow-pitched hipped slate roof; single storey; single bay; in the south elevation is a three-light casement with a four-centred head and latticed lights and, to the left, the entrance with a gabled rustic timber porch. The castle is said to incorporate medieval masonry from the remains of Halesowen Abbey and is the largest building in Hagley Park.