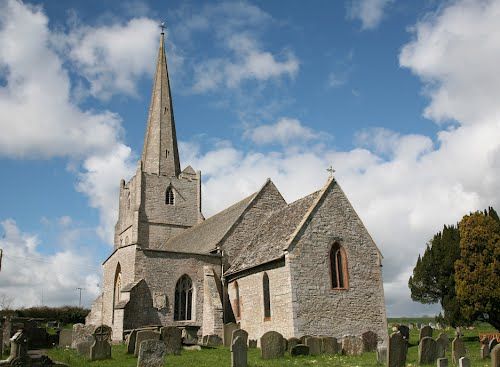 Church. C14 with C12 and late C13 remains. Restored 1876. Rubble with
roofs of stone slate and tile. Comprises a west tower with stone spire,
a nave with north aisle and clerestorey, a south transeptal chapel, and
a lower chancel. The tower is of three stages with diagonal buttresses
and has a ribbed spire set back behind an embattled parapet. The bell
openings are each of two trefoiled lights with a quatrefoil under a pointed
head. The middle stage has, on each side, a central trefoiled niche flanked
by blank quatrefoils and by slit openings. The west window is of three tre-
foiled lights with Perpendicular tracery under a pointed head. The pointed
west doorway with gabled hood was inserted in 1839. In the south wall of
the nave are two pointed one-light windows restored in the C19. Above the
porch to the right is a window of two trefoiled lights. The present porch
is dated 1925 and timber-framed. To the left of the C19 inner doorway are
the jambs and part of an arch of a C12 doorway, with zig-zag ornament. The
south chapel has diagonal buttresses and a gable of shallow pitch. Its south
window is of four trefoiled lights under a pointed head with C19 tracery.
Its east window is of three trefoiled lights with early C15 tracery. The
north aisle has two C19 windows with two buttresses between them. Both
windows are of two trefoiled lights under a flat head. The three clerestorey
windows are similar. On the south side of the chancel are two chamfered lancet
windows. On the north side are two windows restored in the C19. The eastern
one is of two pointed lights under a pointed head. The east window is early
is C14 and of two trefoiled lights under a pointed head. Interior: tall
pointed tower arch is chamfered in two orders. Arcade of four bays has
pointed arches chamfered in two orders springing from piers of quatrefoil
plan. The nave roof is C19 and has trusses with curved braces to collars
and V-struts above. The chancel arch is round, with an outer billet moulding
and with angle shafts which have scalloped capitals and abaci with carved
decoration. The font is C15 but re-tooled and is octagonal with a shield
of arms carved on each face. The south windows contain some re-set C17
shields of arms.