A Grade II* Listed Building in Docklow and Hampton Wafer, County of Herefordshire 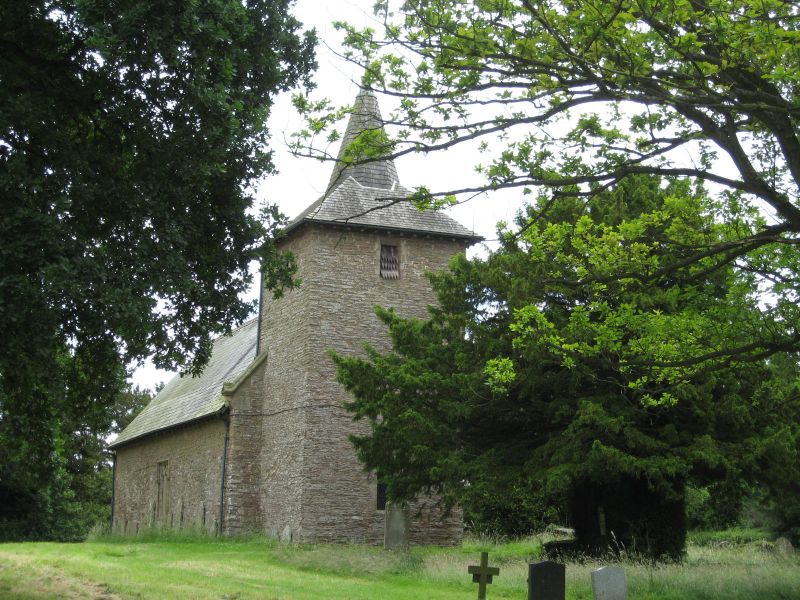 Find accommodation in
Stoke Prior

Parish church. C12 origins, extended late C13, largely rebuilt in 1880 by
Thomas Nicholson. Sandstone rubble with ashlar dressings; slate roof with
decorative ridge tiles, parapet with kneelers at west end and wrought iron
cross finial at east end of ridge. The bell-tower has a shingle roof. West
tower, continuous three-bay nave and single-bay chancel with south porch to
nave. West tower:late C13 with C19 upper part and spire. Two stages. Lower
stage has a late C13 cusped lancet in its west elevation. Belfry stage has
rectangular louvred bell chamber openings on its north and west side. There
is a clockface on the south side. Shallow pyramidal roof at base of short
octagonal spire with weathervane. Nave and chancel: largely rebuilt in 1880,
but some C12 masonry survives, notably the north wall and the base of the south
wall. The north elevation has traces of two small blocked window openings and
a C19 nave window of three lights with a square head and a hoodmould on head
stops. The south elevation has a buttress with offsets at the division between
nave and chancel and a similar 2-light and 3-light nave window and 2-light
chancel window to the north nave window. At the east end buttresses with
offsets flank the 3-light east window which has a two-centred arched head and
a hoodmould with head stops. The south porch is C19, gabled and timber-framed
on an ashlar base. It has a chamfered pointed archway and above is a tie-beam
truss with struts and glazed panels. The side elevations have three lower
boarded panels and above a glazed mullioned window of eight lights. The south
doorway has a plain pointed archway of two chamfered orders. Interior: C19
chamfered pointed tower arch. The C19 nave roof has two moulded arch-braced
collar trusses on head corbels with subsidiary moulded tie-beams and also a
moulded arch-braced collar and tie-beam truss with raking struts; the arch-
braces are pierced with quatrefoils and trefoils. The chancel has a C20 wagon
roof. The fittings include a C19 panelled reredos, an early C17 altar table
with turned legs and moulded rails, an early C19 mahogany and-brass organ case
by J C Bishop, a C19 octagonal stone front and three-sided timber pulpit and
a mid-C17 parish chest with panelled front and carved top rail. There is also
recorded to be a bench in the tower incorporating some C17 panelling. Memorials:
chancel has two memorials to the Evans family. One is late C18 and surmounted
by an entablature and urn,the other is early C19. Also memorial to Thomas Deykin,
died 1833, on the west wall of the nave. Glass: the east window has stained glass
by W Done of Done and Davies, of Shrewsbury, dated 1880. (RCHM, Herefs, III, p 43,
item 1; BoE, p 114).