A Grade I Listed Building in Pipe Aston, County of Herefordshire 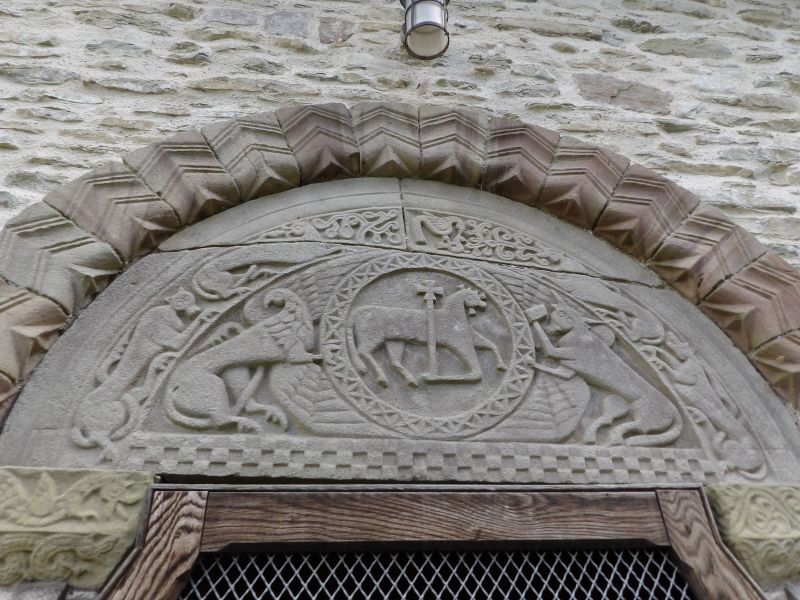 Nave: in the
west wall are two C19 round-headed lights with chevron and nailhead
mouldings on the heads. There are two similarly detailed but much longer lights
in the south elevation. The north elevation has a C12 round-headed light
to the west of which is the north doorway. This is C12 and has plain jambs
with chamfered imposts enriched with dragonesque and foliated detail. The
round arch has chevron mouldings and encloses a carved tympanum. This has
a central circle enclosing an Agnus Dei held by the eagle of St John and
the winged bull of St Luke and is surrounded by an outer band carved with
four beasts, a bird and foliage. The south vestry was added in 1948 and
encloses the south doorway. It is gabled and has diagonal buttresses with
offsets at the south end. There is a pair of cusped lancets at the south
end and in the east side elevation. The west bellcote was rebuilt in 1879.
It is gabled, has two shallow offsets and a single chamfered pointed
archway for one bell of 1691 by John Martin of Worcester. The chancel was largely
rebuilt in C13. It has diagonal east end buttresses with offsets, an east
window of three stepped lancets with C13 splays and a C19 head and rear arch.
In the north wall is a C12 round-headed light and, to the west of it, a
blocked doorway with a timber lintel, probably of C17 date and which may
have led to a former south vestry. In the south wall is a pair of late C13
cusped lancets and, to the west of them, is a low side window of c1500 and
of one square-headed light with a C19 shutter.

INTERIOR: C13 chancel arch
is two-centred and of two continuous chamfered orders. Nave roof is late
C14 and has collar and tie-beam trusses and two tiers of cusped wind braces
forming cross patterns between each truss. The chancel roof has a similar
central truss and moulded wall plates. In the chancel is a late C17 or
early C18 altar table with turned legs. Similar balustered altar rails,
and a C17 chair, panelled with geometric design. In the north wall are the
lintel and jambs of the blocked doorway. Within the doorway is set part of
any early C14 stone coffin lid with incised decoration. On the south jamb
of the chancel arch is attached a carved timber figure corbel. The east
and side walls of the nave have C12 wall paintings in red pigment with
addorsed flowers on stalks against a painted masonry effect background.
Two corbels flank the head of the chancel arch. The font is made from a
C12 stone in the form of a truncated cone, hollowed out on the base and
carved with a dragon, a beast and scrolled foliage. The pulpit C19 and
three-sided and there is a parish chest near the former south doorway into
the vestry. This south doorway is C12 and has a round-head and plain jambs.
Memorials: there is a ledger slab in the nave and chancel, probably both
early C18.